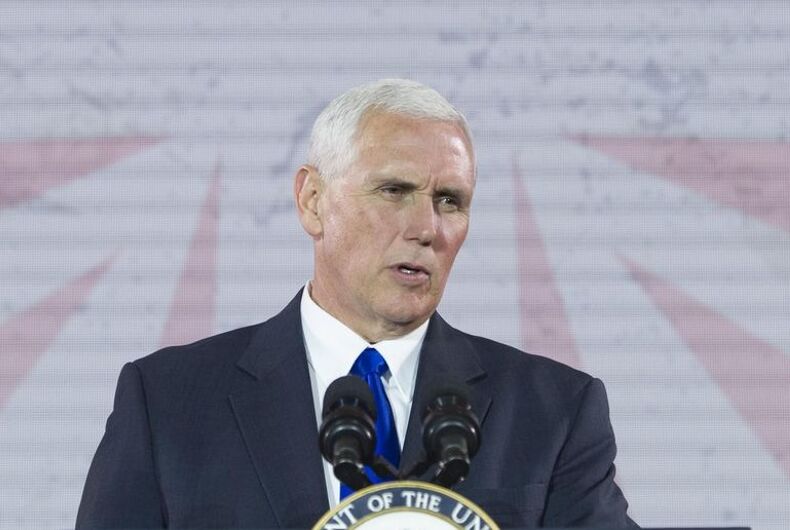 Mike Pence gave a speech honoring Focus on the Family for their 40th anniversary.Photo: Associated Press

Gay Olympic figure skater Adam Rippon made it clear he disapproved of the Trump administration’s choice to send Vice President Mike Pence as the ceremonial head of the US delegation. And when the upset politician’s staff demanded a meeting with Rippon, the Olympian was even more clear: “No” means no.

The athlete told USA Today that he would not meet with Pence before the games opened because the politician supports “ex-gay therapy.”

Rippon is referencing a statement made on Pence’s congressional campaign website in 2000.

Pence argued that the Ryan White Care Act, providing funding for HIV/AIDS patients, should only be reauthorized “only after completion of an audit to ensure that federal dollars were no longer being given to organizations that celebrate and encourage the types of behaviors that facilitate the spreading of the HIV virus. Resources should be directed toward those institutions which provide assistance to those seeking to change their sexual behavior.”

Pence’s staff shot back immediately denying that the Vice President had ever supported conversion therapy despite the position he posted on his website. Despite pushback from reporters, Farah refused to say what Pence was referencing in the statement.

Related: Gus Kenworthy talks to Ellen about being an openly gay Olympian & his anti-Pence comments

“The vice president is proud to lead the U.S. delegation to the Olympics and support America’s incredible athletes,” Pence’s press secretary Alyssa Farah said in a statement. “This accusation is totally false and has no basis in fact. Despite these misinformed claims, the vice president will be enthusiastically supporting all the U.S. athletes competing next month in Pyeongchang.”

But within an hour of the story’s publication, Pence’s staff was calling the US Olympic committee and demanding to meet with Rippon according to two sources who spoke to USA Today. Once again, Rippon rebuffed the offer to meet with America’s highest ranking homophobe saying he needed to concentrate on the upcoming games.

“I’m not trying to pick a fight with the vice president of the United States,” he said after weeks of controversy over his stance.

“I don’t think he has a real concept of reality,” Rippon said at the time. “To stand by some of the things that Donald Trump has said and for Mike Pence to say he’s a devout Christian man is completely contradictory. If he’s okay with what’s being said about people and Americans and foreigners and about different countries that are being called ‘shitholes,’ I think he should really go to church.”

Rippon also said he will not attend the customary trip to the White House after the games are over.

Your Grindr & Jack’d accounts can be hacked