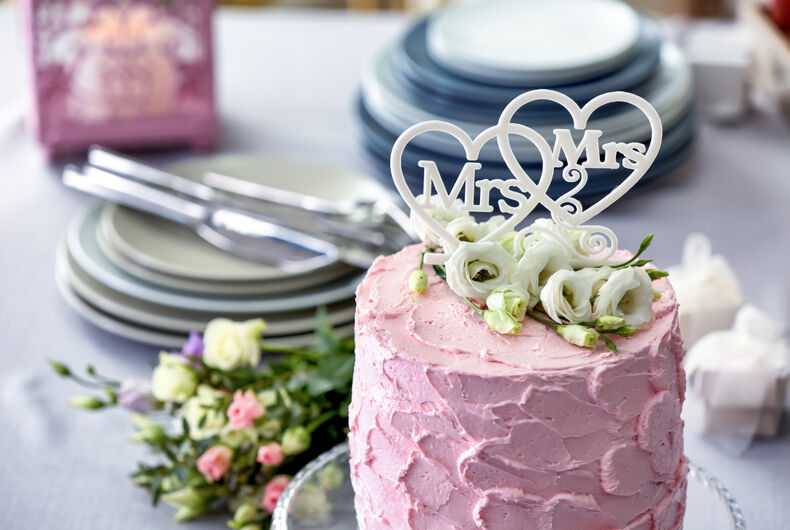 Superior Court Judge David Lampe has ruled that a California baker has the right to discriminate against gay and lesbian couples seeking a wedding cake. The judge claimed that Tastries Bakery owner Cathy Miller’s First Amendment rights were infringed by the state’s civil rights laws forbidding discrimination by merchants serving the general public.

Mireya and Eileen Rodriguez-Del Rio filed a complaint with the California Department of Fair Employment and Housing. Lawyers for the state brought the lawsuit against Miller.

Lampe’s ruling, however, was only on a request for a preliminary injunction against the baker. The next hearing is set for June, but Miller’s lawyers have said they will seek to have the case dismissed based off the judge’s ruling.

“The State cannot succeed on the facts presented as a matter of law. The right to freedom of speech under the First Amendment outweighs the State’s interest in ensuring a freely accessible marketplace,” Lampe wrote in his ruling.

“The right of freedom of thought guaranteed by the First Amendment includes the right to speak, and the right to refrain from speaking. Sometimes the most profound protest is silence.”

Miller’s attorneys argued that making a wedding cake is an artistic expression and the judge agreed.

“A wedding cake is not just a cake in a Free Speech analysis. It is an artistic expression by the person making it that is to be used traditionally as a centerpiece in the celebration of a marriage,” Lampe wrote.

Related: This baker can’t understand why people don’t like her homophobia

“There could not be a greater form of expressive conduct. Here, Rodriguez—Del Rios plan to engage in speech. They plan a celebration to declare the validity of their marital union and their enduring love for one another. The State asks this court to compel Miller against her will and religion to allow her artistic expression in celebration of marriage to be co-opted to promote the message desired by same-sex marital partners, and with which Miller disagrees.”

The judge’s logic left observers scratching their heads as he tried to give some wiggle room for his decision, saying there was a difference between creating a wedding cake and selling a pre-made cake that would be used in a wedding.

“A retail tire shop may not refuse to sell a tire because the owner does not want to sell tires to same sex couples. There is nothing sacred or expressive about a tire. No artist, having placed their work for public sale, may refuse to sell for an unlawful discriminatory purpose. No baker may place their wares in a public display case, open their shop, and then refuse to sell because of race, religion, gender, or gender identification,” Lampe wrote.

“The difference here is that the cake in question is not yet baked. The State is not petitioning the court to order defendants to sell a cake. The State asks this court to compel Miller to use her talents to design and create a cake she has not yet conceived with the knowledge that her work will be displayed in celebration of a marital union her religion forbids. For this court to force such compliance would do violence to the essentials of Free Speech guaranteed under the First Amendment.”

Miller, of course, agreed with the judge’s logic, saying, “I am very happy to serve everything from my cases to anybody. But I cannot be a part of a celebration that goes against my lord and savior.”

The baker’s website features a long list of example wedding cakes she has made for couples, but under the judge’s ruling a lesbian or gay couple would not be able to order one, despite the requirement under his logic for unique artistic expression because the baker would have to recreate it.