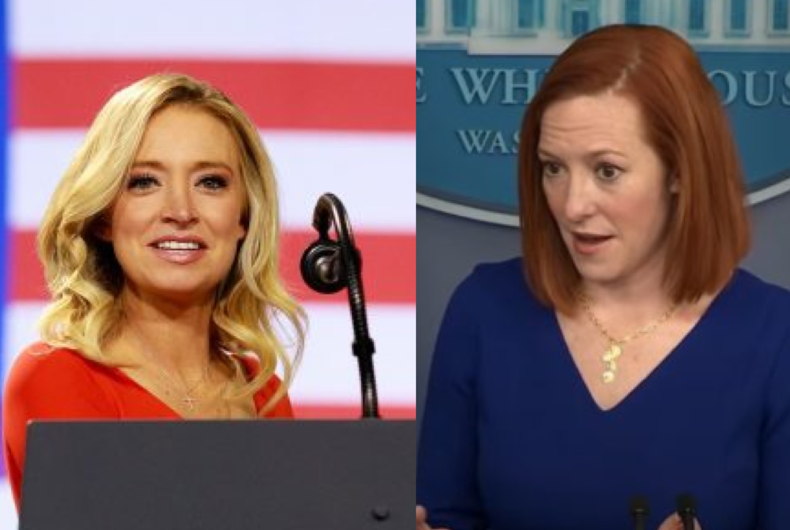 Former Trump Press Secretary and current Fox News host Kayleigh McEnany spent yesterday complaining that her successor, Jen Psaki, is getting more “fawning” coverage in the media. McEnany appeared on a Fox News panel that attempted to criticize the media after it was reported that a magazine had sent photographer Annie Leibovitz to photographed Psaki for the magazine at the White House.

Others on the panel, including another ex-Trump official, didn’t find a problem with it, though — just McEnany.

“It’s just so sad that you have a fawning press corps like this, a fawning media sycophantically covering members of the Biden administration,” McEnany said on her show Outnumbered, co-hosted with Emily Campagno.

She believes that the media is failing to cover the Biden administration with the rigor they did the Trump administration. “We need investigative journalism. We don’t need fawning coverage. It doesn’t do the American people any justice.”

She also complained about the repeated “hit pieces” she faced as a public figure in the administration.

SPOTTED at the White House: Annie Leibovitz who is here to photograph Jen Psaki for an upcoming magazine profile.

With the announcement that Annie Leibovitz is doing a photo shoot with Jen Psaki, Fox brings on a jealous Kayleigh McEnany to whine about not getting any profile pieces herself, and how the press was mean to her compared with Jen. pic.twitter.com/QjMUnd8qeG

McEnany did face ‘tough’ media coverage after she took over for previous press secretary Stephanie Ann Grisham, who failed to hold any press conferences in the nearly two years prior. McEnany, who made a name for herself attacking LGBTQ rights while working for CNN and Fox News prior to the Trump administration, was at least willing to step to the podium, in front of journalists.

She infamously told reporters on her first day, “I will never lie to you. You have my word on that.” She would then lie repeatedly during her eight-month tenure.

During that time, Trump repeatedly took over the podium for COVID-19 briefings to suggest that Americans should inject Lysol into themselves or defend tweets about taking hydrocloroquine as a solution to coronavirus, leaving McEnany to further explain his nonsense.

Some of McEnany’s highlights when she actually could speak for the president included calling out Chicago Mayor Lori Lightfoot (D) “derelict,” falsely claiming that Trump was the first president to honor World AIDS Day, and refusing to acknowledge that the election was won by now-President Biden for weeks.

Yet, when named repeatedly as an example of a strong working mom from the Trump administration, and prompted to attack the current administration, former State Department spokesperson Morgan Ortagus refused to.

“I have a little bit of a different perspective,” she said to follow up McEnany, “this will surprise many Fox News viewers — Jen Psaki is actually a good friend of mine.”

Ortagus explained that Psaki was the State Department spokesperson prior to her in the Obama administration and helped her succeed in the role by actually working with her during the Obama-Trump presidential transition. McEnany and many in the Trump administration did not do the same for the Biden administration.

“So I think she’s a great person, she’s a great mom,” Ortagus said, “so I don’t see her success as a threat to my success… or Kayleigh’s success.”

Ortagus then explained that it makes sense to her that she and other Trump administration women didn’t get Vogue coverage. “The people probably subscribing to Vogue and other magazines… probably don’t have the same ideology as we do.”

McEnany then rushed to respond and “make one point” that she “[doesn’t] want or care about a Vogue profile.” She claimed that she had one goal as press secretary, to elevate “forgotten” men and women.

The other guests on the panel, Julie Banderas and Ken Elder, also said they didn’t have a problem with Psaki getting coverage from Vogue, just that they wish Trump officials had gotten the same. Banderas focused on the fact that Psaki got questions about Biden’s cats, and wishes the media would continue to cover that.

When Fox News reported on their own segment, they only included McEnany’s comments and claimed that Ortagus and others agreed with her.

Organized religions rarely agree on much except for one thing: Oppression of LGBTQ people