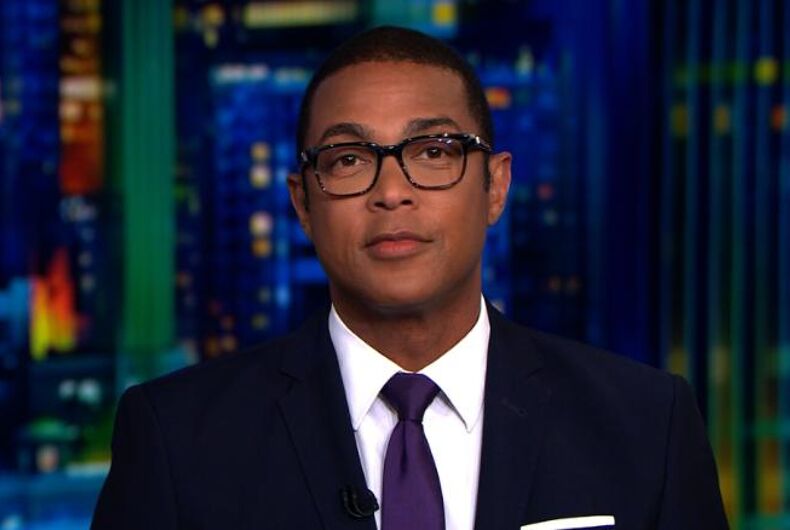 Don Lemon has been front and center at CNN, as an anchor and host of CNN Tonight, covering the last four years of the Trump administration. He took to television screens daily while President Trump and others in his circle tried to smear the cable network as the embodiment of what they believe to be ‘fake news.’

He can’t wait for it to be over. At least, that’s what he seemed to want to express in a recent on-air segment.

Lemon was anchoring on December 15, going over a review of that day’s political events — namely the Republicans and Trump administration officials that still refused to acknowledge that Joe Biden has won the election and is the President-elect.

At the end of the review, footage from that day’s White House press briefing was played. Lemon prefaced it as coming from the “carnival of lies that is the White House.”

The footage showed reporters questioning the White House Press Secretary — also known as Kayleigh McEnany, who was a CNN commentator prior to leaving for Trump’s campaign in 2016, where she cashed in on her support to earn spots in his administration.

In the footage, McEnany — “acting like she’s not about to be out of a job,” Lemon notes — is seen repeatedly dodging recognition of the election results, deferring any questions to the Trump campaign. She called the electoral vote on December 14 that finalized Biden’s victory “one step in the constitutional process” and said that the President is “involved in ongoing litigation.”

McEnany conveniently leaves out that she herself is a senior aide to the Trump campaign, so by her own reasoning, she was in some way responsible for procuring an answer to the question either way.

When the footage is up, and the camera shot turns back to Lemon, he couldn’t even keep his game face on. He starts saying, “do you know she also works for–,” possibly referring to McEnany’s dual roles as an administration and campaign employee, but more likely her stint at the network. Instead, he breaks in favor of a more succinct dismissal.

Apparently, Don Lemon has finally had enough with Kayleigh McEnany and her attacks on CNN:

"Did you know she used to work for — girl, bye! … You were happy to be here and now we don’t know what we are doing? Girl, bye!" pic.twitter.com/Thal4Jry4b

After waving his hand as if to literally move McEnany over to the left, Lemon takes a deep breath and recollects himself. He sighs, saying there’s just “so much disinformation coming from the podium.”

He seems as if he’s about to move on, but he still has some steam to let out on his former co-worker.

“Every day, it’s like, [she] comes out [and] reads propaganda,” Lemon slams McEnany. “[She] talks about what the media is doing, criticizes the media, ‘this is what you should be covering…'”

Lemon finishes his read of the press secretary, noting, “when you sat here with us, you thought we had it. You were happy to be here, but now, we don’t know what we’re doing?”

Lemon, again, has only two words to sum up his view of McEnany: “Girl, bye.”

The on-air personality, who has been out since 2011, gets back on topic, analyzing the Trump administration’s refusal to acknowledge the election’s conclusion. “The President and his allies have lost at least 50 court cases. So much losing!”

“Why do they do it? Why do they act like they’re living in an alternate — reality, and universe? You know what they say… follow the money,” he says, reporting that Trump has sent nearly 500 fundraising emails and over 150 fundraising texts after election polls closed on November 3.

The show went on, but Lemon’s remarks for his once-colleague instantly became a hot topic.

This is not Lemon’s first time directing shade at the Trump administration. This, however, was one of his most direct reads to date, and especially because it was directed at someone that used to criticize Trump across from him on his television set. It wasn’t until she received advice on how to jump-start her career that McEnany started pulling for Trump and his campaign, such as when she defended Mike Pence on one show in 2016 after Lemon bought up the then-candidate’s clear anti-LGBTQ record.

So, while this one has a personal slant for Lemon, his read of McEnany appears right on the mark.