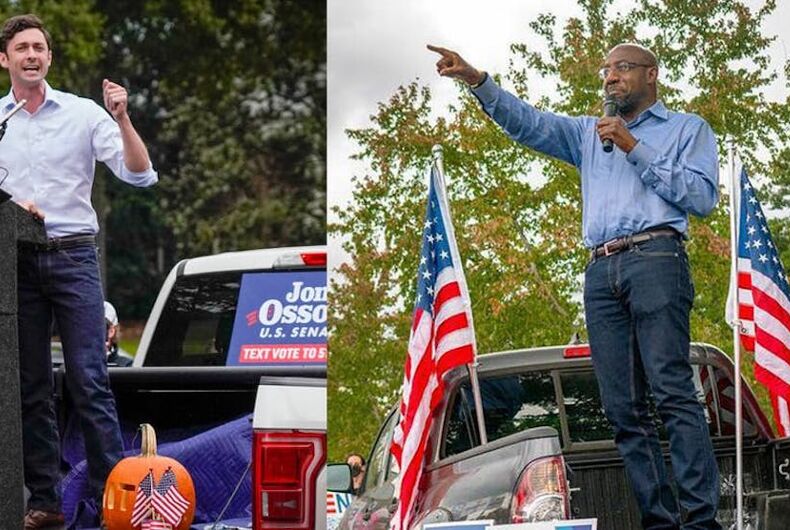 Out of all the states that Donald Trump has targeted for his coup attempt, Georgia is the one he hates the most. The margin was extremely close, and Trump had counted on Brian Kemp, who modeled himself on the president, to overturn the results in his favor.

But in his endless tirade of lies about fraud and illegal votes, Trump created a real problem for the GOP. The balance of the U.S. Senate hangs on the two special elections being held on January 5, and Republican incumbents Kelly Loeffler and David Perdue are facing monumental challenges from Democrats Raphael Wanock and Jon Ossoff, respectively.

Related: Georgia’s Kelly Loeffler has been donating her Senate salary to an anti-LGBTQ group

Things may not be going quite as Republicans had hoped. Trump undermined the faith of Republican voters in their own electoral system. Why should they vote, if their own president tells them it’s corrupt?

Unfortunately for Republicans, that problem appears to have started playing out already at the ballot box. Early voting in Georgia started this week, and the numbers are already through the roof.

More than 1 million voters have cast their ballots already. At that rate, the turnout will rival the presidential election.

Georgia’s unique election standard is the reason for the runoffs. The state requires a candidate to win 50 percent plus one outright to win the election. While Wanock and Ossoff came close, they still trailed behind Loeffler and Perdue, who themselves didn’t win half the votes.

Normally, Republicans have the upper hand in runoff races like these. Democrats aren’t known for turning out for runoffs and other off-cycle races. But just as the presidential race this year led to huge turnout everywhere, the Senate races in Georgia seem to be continuing the trend.

Of course, just because a lot of people vote doesn’t mean Democrats will win either or both seats. As the presidential election showed, high turnout doesn’t always work in the Democrats’ favor,  which undermines the main argument for Republicans’ voter suppression efforts.

While Warnock and Ossoff are hammering their opponents on their pandemic response, Loeffler and Perdue seem to inhabit an alternate universe where the pandemic is barely mentioned.

Instead, they are busy whipping up fears that Rep. Alexandria Ocasio-Cortez (D-NY) will overthrow the government and Georgians will soon be forced to sing the socialist anthem (“The Internationale,” presumably) instead of hymns.

In short, despite Trump’s loss, they are tying themselves even more closely to him.

Right now, the races are too close to call. But if Democrats manage to pull both wins off, President-elect Biden’s job will get a lot easier. The Senate will be split 50-50, and as President of the Senate, Vice President Kamala Harris can break ties. That lessens — but doesn’t entirely remove — the obstacles that Republicans will place in Biden’s path.

That also will offer hope for LGBTQ-related initiatives. Both Loeffler and Perdue have been dreadful on those issues. Having both of them tossed from office would be a great way to start the new year.

Broadway comes out singing to support Democrats in Georgia