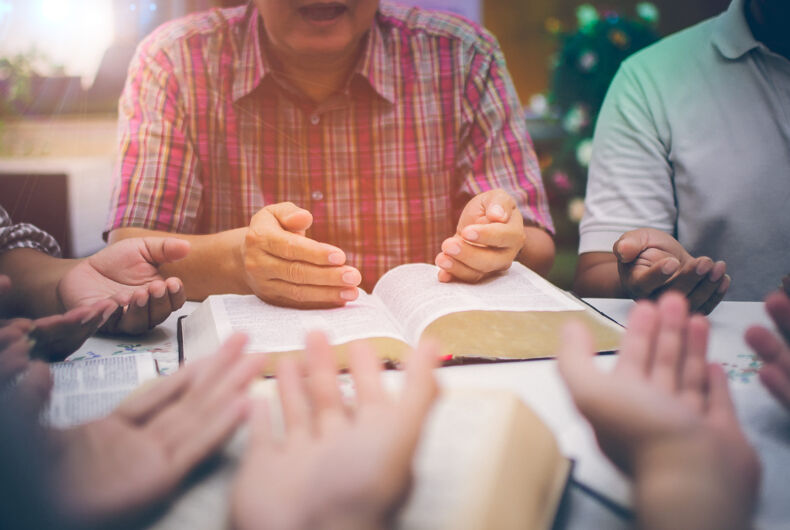 In 2005, I remember leaders from three major monotheistic world religions that were often at odds with one another — Judaism, Christianity, and Islam — joining together in a united demonstration in Israel to protest and prevent a 10-day international LGBTQ Pride festival planned in Jerusalem that summer.

I, therefore, nominated the International LGBTQ Community for the 2005 Nobel Peace Prize, an award well deserved for converting warring religions into allies and for reducing tensions that have traditionally separated them. While the Middle East has been a flash point of conflict and warfare for millennia, this coalition between religious leaders indicated that agreement, at least of sorts, was possible.

Related: Southern Baptists are forcing out followers who don’t pledge allegiance to Trump

My point, though filled with irony, was simple: the prime stimulus for oppression toward LGBTQ people throughout our society — on the personal, interpersonal, institutional, and societal levels — are the destructive doctrines and judgments emanating from primarily orthodox and fundamentalist religious communities.

This is in part due to modern, monotheist, Westernized, organized religion.

Many ancient and non-Western cultures base their spirituality on polytheism, or multiple deities – including Hindu, most Native American, Mayan, and Incan cultures. Many believe that the gods are actually created, and they age, give birth, and engage in sex. They saw the universe as continuous, ever-changing, and fluid. These religious views often lack rigid categories, particularly true of gender categories, which become mixed and often ambiguous and blurred.

In contrast, monotheistic Abrahamic (Judaism, Christianity, Islam) religions view the Supreme Being as without origin, for this deity was never born and will never die. This Being, viewed as perfect, exists completely independently from human beings and transcends the natural world. This accounts for the strict separation between the Creator and the created.

Today, many faith communities’ policies and values are progressively welcoming toward LGBTQ people, our sexuality and relationships, and our gender identities and expressions. These communities are working tirelessly to abolish the yoke of oppression directed against us.

Throughout the ages, however, individuals and organizations have employed “religion” to justify the marginalization, oppression, and murder of entire groups of people based on their social identities.

Prior to the concept of a single God and the creation of holy texts, which followers purported were “inspired” or written directly by this God, condemnations against same-sex sexuality were relatively rare. This changed radically with the writing of the Jewish Bible and extended in the Christian gospels, and to an extent later in the Quran.

In the Hebrew Bible (the “Old Testament”), references are frequently made to Genesis 19: 1-25, which describes the story of Sodom and Gomorrah. The destruction of Sodom is frequently cited to justify condemnations of same-sex sexuality.

However, there are several problems in interpreting this story as an argument for a divine proscription of homosexuality. Many early Jews and Christians, and some current Biblical scholars interpret the sin of Sodom to be that of inhospitality toward strangers, and unrelated to sex, while others argue that the sin is sexual in nature.

In the Roman Catholic Catechisms, Catechism 2357 said of same-sex sexuality: “basing itself upon Sacred Scripture, which presents homosexual acts as acts of grave depravity, tradition has always declared that homosexual acts are gravely/intrinsically disordered. They are contrary to natural law. They close the sexual act to the gift of love [i.e., children]. They do not proceed from a genuine affective and sexual complementarity. Under no circumstances can they be approved.”

“Gravely disordered” in this passage refers to acting on same-sex desires with another person while not necessarily applying to the person or people involved: the old “we hate the sin but love the sinner” slight-of-hand.

For Catholics who cannot change to a heterosexual orientation, they are tolerated in the Church if they are able and willing to scale the unreasonable and inhumane heights of the Catholic ramparts by following Roman Catholic Church catechism 2359.

“Homosexual persons are called to chastity,” the catechism reads. “By the virtues of self-mastery that teach them inner freedom, at times by the support of disinterested friendship, by prayer and sacramental grace, they can and should gradually and resolutely approach Christian perfection.”

Pope Francis fortified this at a Vatican conference on so-called “traditional marriage” in November 2014. The Church determined that marriage is between a man and a woman and that “[t]his complementarity is at the root of marriage and family.”

He added that this union between a man and a woman is “an anthropological fact…that cannot be qualified based on ideological notions or concepts important only at one time in history.”

Despite his previous statement as a relatively new Pope — “If someone is gay and he searches for the Lord and has good will, who am I to judge?” — Francis has negatively judged LGBTQ people virtually all throughout his tenure.

Under his tenure, the Vatican has continued to push its anti-LGBTQ agenda and thus, continue harming LGBTQ people.

For instance, in 2015, Alex Salinas, a 21-year-old trans man from Cadiz, Spain, was informing him that it had denied his request to become the godparent of his nephew because being transgender is considered incongruent with Catholic teaching.

But the Orthodox Catholic ethics had developed the concept of “Natural Law” by the 13th century. It includes a set of standards that the Church has inferred are necessary follow an ordering of nature.

Taking a brief glance back in time, not so long ago a position similar to that of “natural law” was used by some Christian leaders to preach what they determined was the “naturalness” in the subjugation of black Africans and in the institution of slavery.

A direct reflection of this position is evidenced by the names of the ships used to transport slaves across the sea, four of which were the “Jesus,” the “Gift of God,” the “Liberty,” and the “Justice.”

Even the Church of Latter Day Saints (LDS) has claimed that “Homosexual behavior violates the commandments of God, is contrary to the purposes of human sexuality, distorts loving relationships, and deprives people of the blessings that can be found in family life and in the saving ordinances of the gospel.”

These words supposedly expressed God’s revelation to the leadership of LDS, and reaffirmed in 1995. The church then justified contributing an estimated 20 million dollars to the 2008 California Ballot 8 initiative campaign, which succeeded for a brief time in limiting the rights and benefits of marriage to one man and one woman.

In Iran since the Iranian Islamic Revolution of 1979, which replaced the Shah with an orthodox Shiite theocracy, many segments of the population have experienced repression under Iranian Sharia law. Among the segments include LGBTQ inhabitants.

Since 1979, some human rights activists estimated between 4000 – 6000 LGBT people have been executed in Iran. Same-sex sexuality between consenting partners in private is defined as a crime. Iranian law condemns males involved in sexual penetrative acts (sodomy or lavat) with the possibility of death, and so-called non-penetrative acts with flogging.

After the fourth non-penetrative “offense,” the penalty is death.

Females convicted of engaging in same-sex sexuality (mosahegheh) may be made to undergo flogging with 50 lashes. And following the fourth conviction, they too are eligible for the death penalty.

Following the Islamic Revolution, trans identity and expression were also classified as crimes. However, the government reclassified these in 1986 as “heterosexual” if the person undergoes gender confirmation procedures. Today, Iran stands as the country performing the most gender confirmation surgeries in the world, second only to Thailand. Iranian trans people, however, still suffer frequent harassment and persecution.

All of this has made me wonder, what if these scriptures weren’t included? Would the Christian gospels and Quran have had nothing on which to pattern their homophobic discriminations? In this event, would they have invented their own, or would there have never been these “religious” justifications to persecute people for the past several millennia based on same-sex sexuality and gender diversity?

Biblical scholar Idan Dershowitz believes that 18 did not appear in the original text of Leviticus:

Well, maybe God simply had not decided to condemn homosexuality on first draft and it took another Earthly century to come to a decision. Much more likely, though, this thing we call “God” is simply a human creation in our often-desperate attempts to make sense of the mysteries of the universe regarding creation and existence.

More ultimate questions need to be raised as the world spins around, as individuals and nations since recorded history have attempted to explain the mysteries of life, as spiritual and religious consciousness first developed and carried down through the ages, as people have come to believe their way stood as the right way.

In reality, all religious doctrines stem from uncertainty and conjecture, from multiple gods, hybrid gods and humans, from Mount Olympus and before, to Earthly deities and the heavens, to Adam and Eve in the Garden of Eden, to the Burning Bush, to the Covenant and the parting of the Red Sea, to the Immaculate Conception and Resurrection, to Muhammad’s rising to Heaven from the Rock, to the Golden Tablets, all beginning with the human creation of god(s).

Anyone can believe anything they wish, whether others find those beliefs laudable or offensive. When, however, the expression of those beliefs denies other individuals or groups their full human and civil rights, a critical line has been crossed, for their actions have entered the realm of oppression.

When religious leaders preach their damaging interpretations of their sacred texts on issues of same-sex relationships or identities and gender identities and expressions within and outside their respective houses of worship, they must be held accountable and responsible for aiding and abetting those who target and harass, bully, physically assault, and murder lesbian, gay, bisexual, trans, or queer people.

They must be held accountable as accomplices in the suicides of those who are the targets of these abusive actions, and who grow up in religious denominations and larger societies that teach them to deny, to hide, and to hate themselves.

How many wars are we going to justify in the name of “God,” our “God” versus their so-called “false gods”?