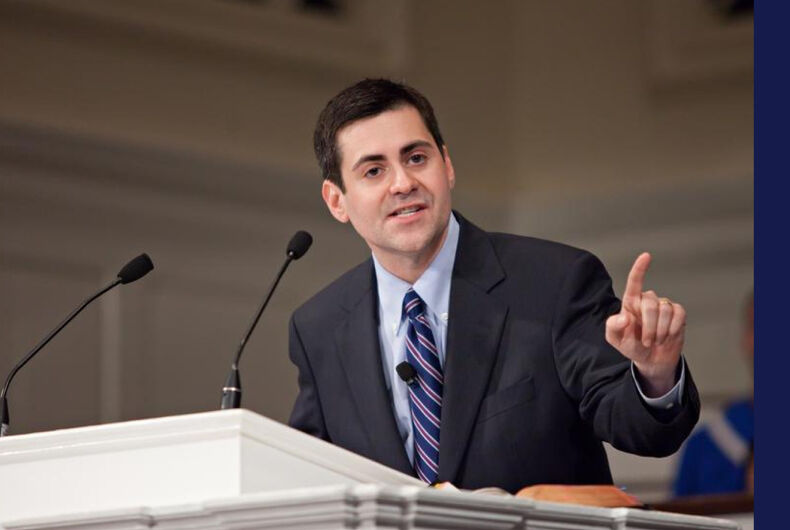 White evangelicals have always been the core of Donald Trump’s support. Once they got over their unease with his fungible approach to morality, conservative Christians found in Trump the political warrior — or mega-bully — that they have long been seeking. The only thing they disliked about him was that he curses.

After acting like a political party through the Trump presidency, it’s no surprise that evangelicals are now following the GOP’s template of purging their ranks of anyone who does not worship at Trump’s altar. The latest case in point: the departure of Russell Moore from the leadership of the Southern Baptist Convention (SBC).

Moore held one of the top positions in evangelical Christianity. As head of the SBC’s Ethics & Religious Liberty Commission, he has been a fervent advocate for the denomination’s right-wing positions. He has been a staunch opponent of LGBTQ rights, especially marriage equality, and has pushed hard for religious liberty exemptions that would gut existing protections.

However, Moore has never been a fan of Donald Trump. Unlike other prominent evangelicals, like Franklin Graham and Tony Perkins, Moore was unwilling to trade his religious beliefs for access to power and Supreme Court appointments.

When Trump was running for president in 2016, Moore accurately described him as “someone who not only characterizes sexual decadence and misogyny, brokers in cruelty and nativism, and displays a crazed public and private temperament — but who glories in these things.”

For his honesty, Moore very nearly lost his job in 2017. Now he’s leaving, apparently voluntarily, as the SBC makes adherence to Trumpism a higher priority than adherence to articles of faith.

The final straw was the January 6 insurrection at the Capitol, which Moore laid directly at Trump’s feet. “This week we watched an insurrection of domestic terrorists,” Moore wrote in an editorial, “incited and fomented by the President of the United States.”

Moore made it clear that his fellow evangelicals had lost all moral authority by minimizing just how bad the insurrection was. “If you can defend this, you can defend anything,” he wrote. “If you can wave this away with ‘Well, what about …’, then where, at long last, is your limit?”

Moore is departing for the evangelical journal Christianity Today, which has had its own Trump troubles. In December 2019, editor Mark Galli was blasted for penning an editorial saying Trump deserved to be impeached and removed from office for trying to get Ukraine to dig up dirt on Joe Biden. Galli subsequently retired from the magazine and even from evangelicalism, becoming a Catholic last year.

Moore has always been considered a bit of a squish by conservatives. He has favored immigration reform and has made fighting racism a key mission of his leadership. But his willingness to call Trump out for his immorality was just too much for the SBC.

Moore is not alone in choosing exile. Beth Moore (no relation), a wildly popular evangelical author, announced last March that she no longer considered herself a Southern Baptist because of the “staggering” disconnect between Trump’s misogyny and racism and the denomination’s embrace of him.

What the departure of both Moores highlights is the increasing politicization of religion, in which adherence to a political leader is more important than teachings about morality. LGBTQ people are never going to agree with Russell Moore and other evangelicals on the morality of marriage equality. Those are genuine disagreements.

But you would think we could all agree on the wrongness of Trump’s actions following the election, up to and including fomenting violence. That should be an issue that is an easy call for anyone, especially religious leaders. What Moore proves is that for evangelicals today, faith means whatever Donald Trump says.