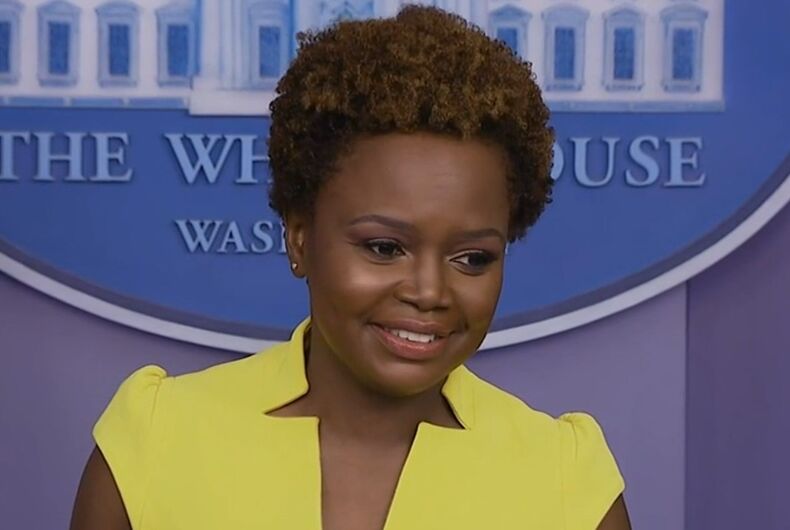 Out Deputy White House Press Secretary Karine Jean-Pierre smacked down a Fox News reporter who was trying to push the narrative that President Joe Biden isn’t doing anything about the coronavirus pandemic… just after he announced a further investigation into exactly what the reporter was asking about.

Fox reporter Peter Doocy was at it again at the White House press briefing yesterday, where he said that “anything that kills 591,116 Americans” requires an investigation.

“What would the president do?” Doocy asked. “I mean, would he do anything?”

“I mean, he’s doing something right now,” Jean-Pierre replied. “He asked his team back in March, right, to look into this, look into the origins of COVID-19. This is incredibly important, like his statement says, we need to find out how, where COVID-19 originated from.”

If Doocy had been paying attention, Biden announced earlier yesterday that he ordered the U.S. intelligence community to conduct a review of the origins of the virus. Biden revealed that he already asked the intelligence community earlier this year to produce “a report on their most up-to-date analysis of the origins of Covid-19, including whether it emerged from human contact with an infected animal or from a laboratory accident.”

“So the president has been very clear,” Jean-Pierre continued, adding the Biden “spoke out about this back in 2020, so this is not the first time we’ve heard his voice, his concern, about the origins of COVID-19.”

“I’m just not going to pre-judge, I’m not going to make a statement until we know” the results of the intelligence review, she said.

Doocy: What would the President do? Would he do anything?
KJP: He’s doing something right now pic.twitter.com/N1OGSEVYvd

Doocy has tried the same line of questions with White House Press Secretary Jen Psaki. Last week he asked if the White House has “any circumstantial evidence that it did not originate in a lab.”

Doocy also blamed unemployment on Biden, saying that unemployment benefits were making people so lazy that they weren’t looking for jobs, referring to economists who actually didn’t support his claim.

Yesterday, Jean-Pierre became the first LGBTQ woman to lead a White House press briefing in the James S. Brady Briefing Room and the second Black woman to do so.

“It’s a real honor to be standing here today,” Jean-Pierre said. “Clearly the president believes that representation matters and I appreciate him giving me this opportunity.”