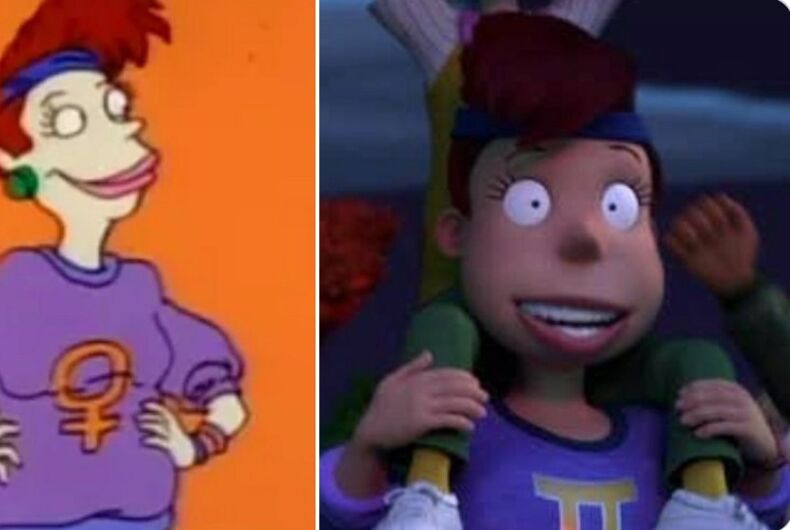 The Rugrats character is now officially a lesbian.Photo: composite

The iconic Nickelodeon cartoon Rugrats has been rebooted for Paramount+ and everyone is freaking out. The new CGI remake premiered on the service today.

Fans and critics aren’t targeting the precocious and naughty toddlers, it’s Phil and Lil’s mom, Betty, that’s the star of the controversy. The character is now a lesbian and their father is nowhere to be found so far.

Betty wore a baggy purple sweatshirt with the female symbol on it. The kid’s father, Howard, was portrayed as rather effeminate in the original cartoon. The two were frequently cited as examples of closeted cartoon characters.

Actor Natalie Morales, who came out as queer in 2017, voices the character and confirmed to AV Club that the change is particularly important to her – and she doesn’t mean the change to Betty’s sweatshirt. It now sports a Gemini symbol.

“Anyone who watched the original show may have had an inkling Betty was a member of the alphabet mafia,” she joked.

“Betty is a single mom with her own business who has twins and still has time to hang out with her friends and her community, and I think it’s just so great because examples of living your life happily and healthily as an out queer person is just such a beacon for young queer people who may not have examples of that.”

“And yeah, Betty is a fictional cartoon,” she said, “but even cartoons were hugely influential for me as a kid and if I’d been watching Rugrats and seen Betty casually talking about her ex-girlfriend, I think at least a part of me would have felt like things might be okay in the future.”

I noticed they changed the symbol on Betty's shirt#Rugrats #Nickelodeon #ParamountPlus pic.twitter.com/B0lCZeZj1Q

Watching new #Rugrats on @paramountplus and Betty just said she had an ex gf. I knew she wasn't 100% straight! After years of wondering it's confirmed!

I always thought in The Rugrats show Betty was gay #Rugrats pic.twitter.com/LFovdHCkjM

— Allison the disney Diva is fully vaccinated (@Daviesallison1A) May 27, 2021

To set the record straight, because some fans are confused: Howard is not being erased, or retconned from the new #Rugrats show. He and Betty just aren't a couple anymore. It's still possible for him to make appearances. Have no fear. pic.twitter.com/GNbdtaI4Pb

This is not surprising news guy’s

It’s been confirmed that in the new updated Rugrats series making its debut tomorrow on Paramount+ that Phil and Lil’s mom Betty will infact be a lesbian #Rugrats #BettyDeville @nataliemorales pic.twitter.com/F8BbkcdlyP

I've met many people with Reptar tattoos, but I think I'm the only Rugrats fan with a Betty DeVille tattoo. #Rugrats #Rugrats2021 pic.twitter.com/SUdv9klSYv