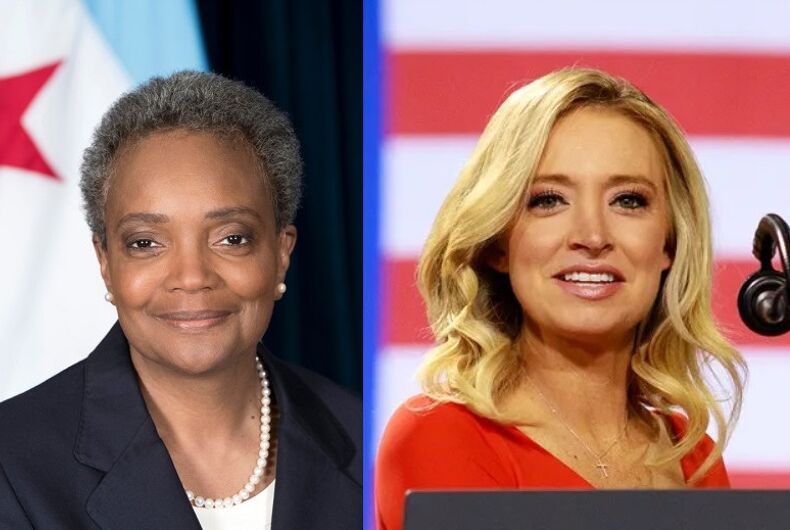 Related: Memes of Chicago’s stern lesbian mayor are taking over the Internet & she loves it

Lightfoot was referring to the name now widely used to describe white women who take advantage of their privilege, or, as Urban Dictionary defines it, “the stereotypical name associated with rude obnoxious and insufferable middle aged white women.”

McEnany went on a rant that mentioned Lightfoot Thursday when asked by Time Magazine about Black people being killed by the police.

McEnany responded, “So are white people.” She said that the issue was “Democrat cities not controlling their streets.”

She brought up Chicago – the far-right’s favorite city to use as a symbol for Black people, much like how “San Francisco values” is conservative shorthand for LGBTQ equality – and said of Lightfoot: “People dying in her- in her- on the streets of her city every weekend.”

“The derelict Mayor of Chicago should step up and ask for federal help because she’s doing a very poor job at securing her streets,” McEnany said before moving on to another question.

This is not the first time Lightfoot as proved she is more than willing to stand up to the Trump Administration. In May, after Trump tweeted “When the looting starts, the shooting starts,” in response to Black Lives Matter protests, Lightfoot stated in a speech, “I will encode what I really want to say to Donald Trump. It’s two words: It begins with ‘F’ and it ends with ‘U.’”

Lightfoot has also made a name for herself during the Covid-19 pandemic for her humorous videos urging people to stay home, and for playing along with Chicagoans who have posted photos of Lightfoot both online and in their windows with a stern stare, shaming people into going back inside.