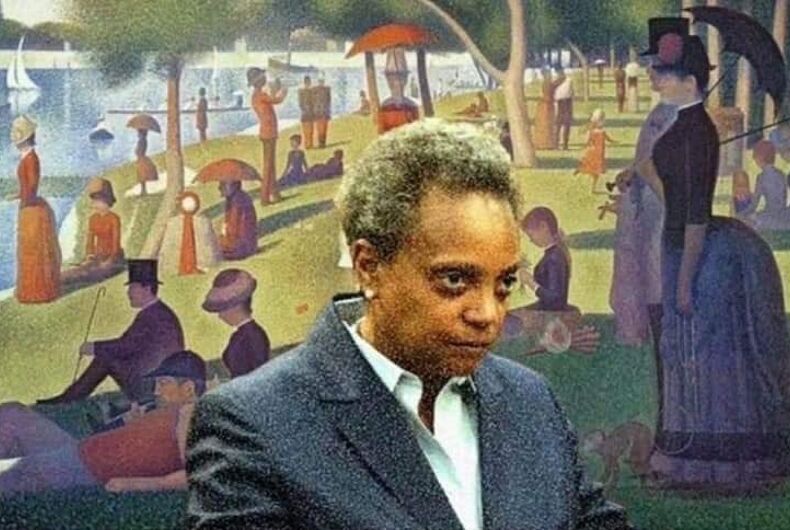 Chicago mayor Lori Lightfoot (D) has become the new face of the ongoing coronavirus pandemic for her stern no-nonsense attitude. Memes of the mayor chastising crowds have swept the internet after she confirmed that she had personally driven around last week telling people gathered outside to social distance or go home.

“I mean what I say: We have to protect ourselves. We have to be smart about what we’re doing in the course of this pandemic. And if it means that I drive around and check whether people are in compliance, I’m happy to do it.”

She said people were surprised to see her stop and lay down the law. Yes, she’s the mom who will actually turn the car around and go home when she’s angry.

“The other night I think we literally broke up an underage drinking party,” Lightfoot told Cameron, according to the Chicago Tribune. “There were some young folks that were in a garage with the door up, it was a beautiful night, we pulled by and I told the driver, ‘Back up,’ rolled down the window and said, ‘Hey, you’re too close. Separate yourself. Social distancing!’”

After Danny Martinez kicked off the viral craze, Lightfoot credited him with bringing some humor to her days.

“Like in any difficult time, I think we’ve gotta have a sense of balance, and humor is a part of it,” she told Book Club Chicago. “I’ve actually enjoyed them. We’ve acted out a few in my household at night, which I’ll keep to myself.”

“What it shows is the creativity of people in this city, in this region, that despite these dire circumstances, and this virus is deadly serious, that we can also see the lighter side of life, what makes us a vibrant and interesting and innovative and creative community,” the mayor said. “So I love ’em.”

The mayor has even joined in the fun and has started retweeting her favorites.

Just a friendly reminder from your Auntie to stay home. #StayHomeSaveLives pic.twitter.com/RpX4tgRx2i

I say Chicago’s mayor Lori Lightfoot. She’s a tough black woman- and she’s openly gay. She’s had a few choice words for him during this whole thing. Plus lots of fun memes. #StayHomeSaveLives pic.twitter.com/pWkYdGL04t

These Lori Lightfoot memes are so hilarious 🤣🤣🤣😭😭😭 pic.twitter.com/IIhmL563nZ

Our greatest glory is not in never falling, but in rising every time we fall. This too shall pass. We are all part of one race…the human race. #stayhomesavelives #flattenthecurvechi #chicago #whereslightfoot #chinatown

this is all i have to say 😌 Lori Lightfoot Memes 😂 pic.twitter.com/vyfUeBcsPe

150 gay men sang together virtually & the result is incredible