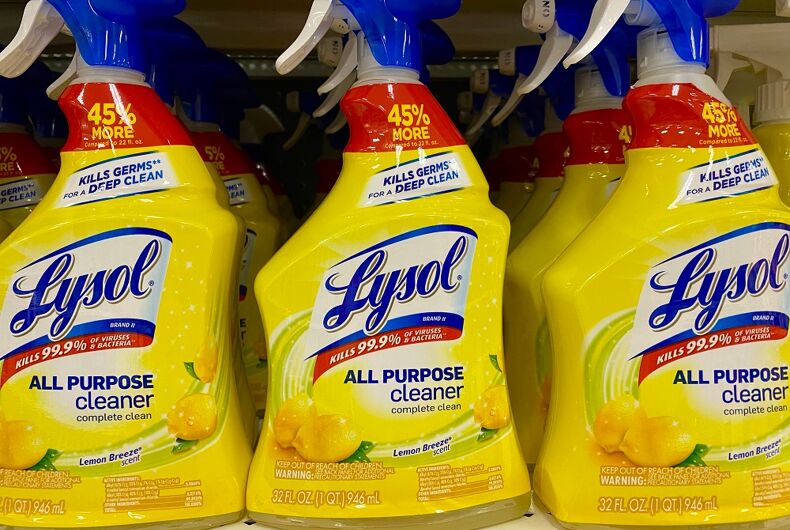 The anti-LGBTQ White House press secretary defended Donald Trump’s suggestion that people inject themselves with bleach or disinfectant to cure COVID-19, lashing out at the media for taking his comments “out of context.”

At yesterday’s White House Coronavirus Task Force briefing, an official discussed research that showed that disinfectants like isopropyl alcohol, UV light, and bleach could kill the virus within minutes.

Trump commented that a “tremendous ultraviolet” or “just very powerful light” on or inside the body could be a treatment for coronavirus.

And then he brought up chemical disinfectants.

“And then I see the disinfectant where it knocks it out in a minute. One minute,” he said. “And is there a way we can do something like that, by injection inside or almost a cleaning?”

“I’m not a doctor. But I’m, like, a person that has a good you-know-what,” he continued, pointing to his head. “Because you see it gets in the lungs and does a tremendous number on them, so it’d be interesting to check that.”

His comments got immediate blowback from public health officials.

The company that produces the disinfectant Lysol – which contains isopropyl alcohol – issued a statement that told people not to drink or inject their product citing “recent speculation and social media activity.”

“We must be clear that under no circumstance should our disinfectant products be administered into the human body (through injection, ingestion or any other route),” the statement said. “As with all products, our disinfectant and hygiene products should only be used as intended and in line with usage guidelines. Please read the label and safety information.”

Please don’t poison yourself because Donald Trump thinks it could be a good idea.

Instead of simply admitting that he made a mistake and apologizing, the new White House press secretary Kayleigh McEnany defended Trump’s comments earlier today, blaming the media for  “irresponsibly” taking them “out of context” to “run with negative headlines.”

“President Trump has repeatedly said that Americans should consult with medical doctors regarding coronavirus treatment, a point that he emphasized again during yesterday’s briefing,” she said in a statement.

McEnany was a die-hard defender of Trump before she got a job as the press secretary, and she has a long history of anti-LGBTQ comments, often in defense of Trump’s politics.

In a 2017 CNN appearance, McEnany said that anti-discrimination measures for transgender people will lead to “straight men coming in and really being a predator against women.”

She also defended Mike Pence when CNN host Don Lemon said that he opposes LGBTQ rights. “Mike Pence loves all people and President-elect Donald Trump has already said he’s not going to roll back the rights that we’ve seen in the gay community,” McEnany said in that CNN appearance.

In a 2015 column discussing the Supreme Court Obergefell v. Hodges case before it legalized marriage equality all over the country, McEnany dismissed LGBTQ activists’ arguments as “a lot of farcical blabber about state-sanctioned discrimination.”

And after the Obergefell decision, she appeared on another show and said “there’s going to be an infringement upon” religious liberty, saying that “religious institutions” would be forced to perform same-sex marriages, a common argument used by conservatives at the time to make people afraid that LGBTQ equality would close churches.

McEnany also appeared on a radio show hosted by Family Research Council (FRC) president Tony Perkins alongside a conversion therapy activist. FRC has been designated as an anti-LGBTQ hate group by the Southern Poverty Law Center.