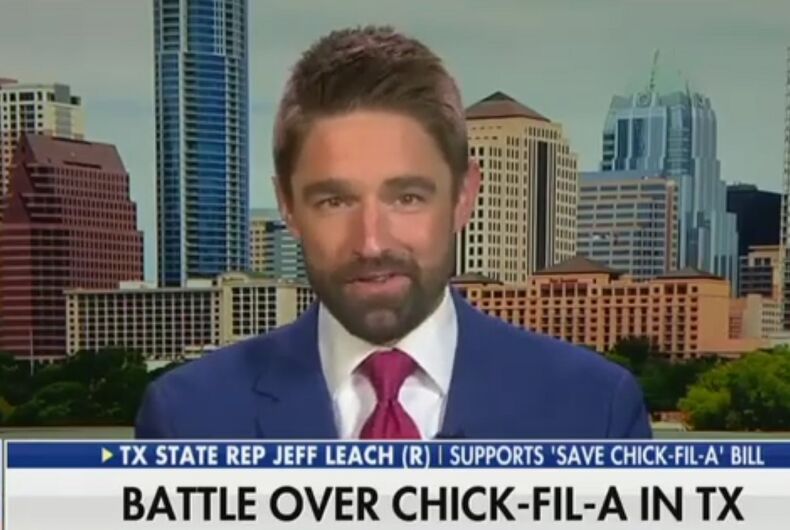 For the past several weeks, Republicans in Texas have tried to use coronavirus to ban abortion, and one lawmaker explained why he was “grateful” for what was happening in a livestream with an extremist anti-LGBTQ group.

State Rep. Jeff Leach (R) was talking with the organization Texas Values last week where he praised Texas Gov. Greg Abbott’s (R) attempt to use the coronavirus pandemic to ban abortion in the state.

Related: The wife of the leader of anti-LGBTQ group “Texas Values” left him for another woman

“Thank God we’ve got a pro-life governor, a pro-life attorney general, and many pro-life warriors across the state like judges who have upheld the rule of law,” Leach said.

Several states, including Texas, have tried to use coronavirus measures to ban abortion. Gov. Abbott placed a moratorium on health care that’s not “immediately medically necessary.” Abortions are only allowed in most cases up to 20 weeks of pregnancy in Texas, which meant that the moratorium could have forced some people to carry unwanted pregnancies to term, putting their health and lives at risk.

The ban led to a weeks-long court fight with conservative judges siding with the governor despite the fact that Americans have a constitutional right to abortion, until the moratorium lapsed this week. The governor has been signing executive orders to re-open businesses in the state.

On the livestream, Leach said he was “so grateful” “ministries” that work against abortion weren’t shut down, and he decried people who “feel the need to continue to perform abortions,” as if coronavirus also placed a moratorium on unwanted pregnancies.

“So my message would be to any woman out there that can’t get into a Planned Parenthood or that believes her abortion is essential, please go visit a local pregnancy resource center,” Leach said.

Pregnancy resource centers in Texas are known for not providing much in terms of real services and instead try to convince pregnant people not to have abortions with “false claims debunked by the American Psychological Association.” Two years ago, the Supreme Court ruled that laws that require pregnancy resource centers to tell the truth are unconstitutional.

Leach was talking with Texas Values, an organization dedicated not only to fighting abortion, but also LGBTQ rights. In a 2015 ad, the group said that transgender equality meant that balding, hairy “biological men” would have a legal right to shower with women in gyms.

In 2019, the group pushed for the “Save Chick-fil-A” law, which banned state and local governments from taking “any adverse action against any person” – including businesses – if they claim that their actions are based on their “sincerely-held religious belief or moral conviction, including beliefs or convictions regarding marriage.”

President of Texas Values Jonathan Saenz said that the ultimate goal of Democrats passing LGBTQ legislation is to “ban the Bible.” He supports conversion therapy for LGBTQ children and has compared marriage equality to incest.

Leach himself supported the Save Chick-fil-A law, going on Fox News to say that he doesn’t believe people should be allowed to “argue with the organizations that Chick-fil-A chooses to support.”

In 2014, he supported a state law that proponents said would have shielded the state from a federal court ruling in favor of marriage equality.

The exchange starts at the seven-minute mark.