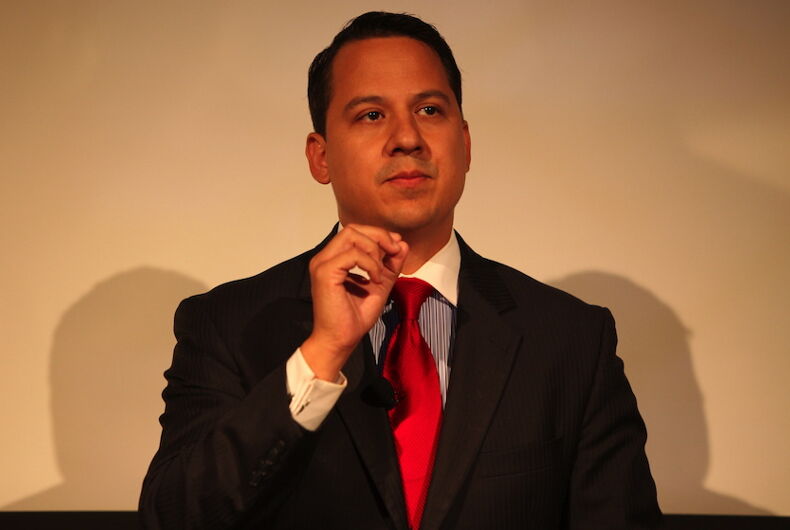 Recently, Texas Democrats filed eight bills supporting LGBTQ rights. And it turns out the leader of the hate group most vocally opposing those bills has an ex-wife who left him for another woman.

Jonathan Saenz is president of Texas Values, the state’s leading anti-gay group. Texas Values has recently said the ultimate goal of the pro-LGBTQ Democratic state bills is to “ban the Bible.” They have also falsely claimed that the bills will threaten Christians with jail time and fines.

The proposed anti-discrimination bills don’t mention Christianity or the Bible and similar laws already exist in dozens of states without Bibles being banned or Christians being tossed into jails.

Nevertheless, Saenz’s group continues to foment conservative Christian hatred against queer people, and perhaps his animus has to do with his ex-wife.

In 2011, Saenz’s wife Corrine divorced him to be with her female co-worker, an elementary school teacher named Ercilia Paredes.

Corrine said her marriage to Saenz was “insupportable due to discord or conflict of personalities,” adding that their conflict “destroys the legitimate ends of marriage and prevents reasonable expectations of reconciliation.”

Corrine and Saenz eventually settled their divorce through mediation.

Since the divorce, Saenz has gone on to say that he see same-sex marriage similar to incest. He supports “ex-gay” therapy for kids, thinks it’s dangerous to let trans people pee in public bathrooms and has called gayness a “dangerous and risky sexual activity that can fiercely jeopardize a person’s well-being.” He also helped overturn Houston’s pro-LGBTQ city ordinance protection in 2015.

We hope his ex-wife is living a happy, healthy life full of love.