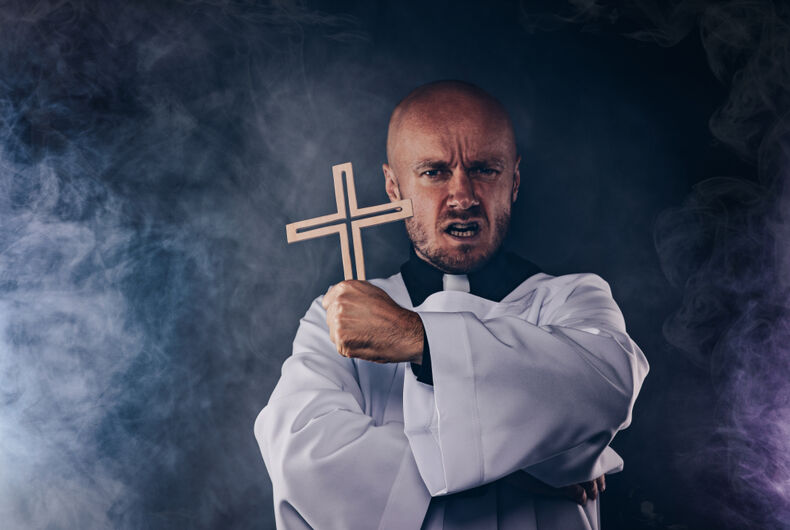 Conservatives warn a new crop of pro-LGBTQ bills would “effectively ban the Bible” in the state of Texas.

Right-wing websites have taken issue with eight pieces of legislation filed by Texas Democrats between Nov. 12 and Jan. 23. Writing for The Resurgent, far-right pundit Erick Erickson claims these bills, if enacted, would “force Christian small businesses to provide their goods and services to support sexual orientation and transgenderism.”

The Federalist goes further by claiming that LGBTQ advocates seek to “create new government power and protections that ban the free expression of biblically grounded beliefs, especially teaching on marriage and sexuality.”

“Numerous bills seek to force people of faith to conform to others’ personal and political activities, while setting aside their own sincerely held religious beliefs,” writes contributor James Wesolek in a Jan. 29 post. “Those who do not comply will face fines, possible jail time, or other criminal charges.”

Quoting the conservative think tank Texas Values, LifeSiteNews concludes the end goal of the LGBTQ movement is to “ban the Bible.”

“Creating more government control and threatening Christians with jail time or fines does not create a tolerant society,” claims the group’s senior policy analyst Nicole Hudgens, who adds that the Democratic bills “shock the conscience and must be stopped.”

Related: Conversion therapy bill dies at the hand of gay politician in California

Claims that Texas Democrats plan to criminalize people of faith would indeed be “shocking,” if they were true.

The bills in question say almost nothing about Christianity or the Bible. Instead they represent fairly mainstream proposals to ban discrimination on the basis of LGBTQ identity in employment and housing; to outlaw conversion therapy from being practiced on queer and transgender youth; and to make it easier for trans people to correct their birth certificates to match their gender identity.

Similar laws are already on the books in dozens of states, and Christians have yet to be rounded up and thrown in jail.

“We don’t have those protections,” she says. “We were finding a lot of cases of LGBTQ folks either being not hired because of their orientation or not promoted and passed over for pay raises.”

“This would provide protection for the LGBTQ community,” Farrar adds.

Bernal claims HB 254, which is strikingly similar to Farrar’s legislation, merely extends the scope of an LGBTQ housing bill he co-sponsored in 2017. If passed when it was introduced two years ago, the bill would have prevented a lesbian couple from being evicted from their home due solely to their relationship or a trans woman from being denied a rental application because a landlord objects to her gender identity.

That legislation did not become law. It did, however, become the first bill of its kind to receive a hearing in the Texas House.

The hearing was mostly “symbolic,” Bernal tells LGBTQ Nation over the phone. But as he explained in a 2018 episode of Full Frontal With Samantha Bee, a lot of “craziness that came from that minor movement.”

For instance, Dr. Steve Hotze of the Conservative Republicans of Texas labeled the bill “evil” and urged his followers to pray for the state.

“There are Texas Legislators who call evil good and good evil … who would allow perverted men and boys, who sexually fantasize that they are women, to enter women’s and girls’ bathrooms, showers, and locker rooms,” Hotze, a close ally of Texas Lt. Gov. Dan Patrick, wrote in a 2017 blog post.

But Bernal claims the idea that pro-LGBTQ legislation is “anti-Christian” dates back to the passage of San Antonio’s nondiscrimination ordinance in 2013. As a member of San Antonio’s city council, Bernal worked to extend protections on the basis of housing, employment, and public accommodations to LGBTQ residents of America’s seventh most-populous city.

Right-wing critics claimed the ordinance was “promoting ungodly behavior,” “legitimizing sin,” and “moralizing things that run afoul of Biblical doctrine,” according to Bernal.

“They were protesting outside my office every day for six weeks, including Sundays,” he claims. “They went door to door in my district telling people I wanted to let ‘grown men in women’s bathrooms.’ They even came to my door and my neighbor’s door and told them these things.”

“I’ve heard it all,” Bernal adds with a sigh.

San Antonio’s nondiscrimination ordinance was ultimately upheld, but the same rhetoric would work to trample Houston’s LGBTQ-inclusive protections in November 2015. After a tireless campaign waged by Christian groups warned that the Houston Equal Rights Ordinance (HERO) threatened “religious liberty,” it was soundly rejected at the ballot box. Voters overturned HERO by a 22-point margin.

While “Ban the Bible” propagandists in Texas surely owe a debt to the nondiscrimination ordinance fights of the recent past, the playbook was lifted wholesale from California.

When openly gay Assemblyman Evan Low (D-Campbell) introduced a bill which would classify conversion therapy as “consumer fraud,” opponents of Assembly Bill 2943 claimed the legislation would “prohibit the sale of the Bible” if made law.

“[T]he California state legislature, they want to tell you how to think, what sort of books that you can read, write and purchase,” he added.

While Allen’s remarks were unfounded, that didn’t stop them from immediately going viral. The OANN segment racked up nearly 200,000 views on YouTube and the claims were parroted in every major conservative outlet in the country. National Review writer David French called the bill “extreme” and “extraordinarily radical,” referring to it as “another attack on free speech” by progressives.

In politics, if you repeat a lie enough times, it has a way of becoming the truth. AB 2943 was eventually killed as a result of Christian opposition.

Rebecca Robertson, chief program officer for Equality Texas, warns that a similar phenomenon may be taking place as the Lone Star State considers its own pro-LGBTQ protections. Robertson says the “false framing” that religious values are under attack has created “hysteria” in more conservative pockets of the state.

“We’re hearing now from some offices in Texas that folks are calling in concerned about this,” she tells LGBTQ Nation.

According to Robertson, the reason conservative activists in Texas are pushing fake news about an “assault on Christianity” is simple: They’re losing the war for public opinion.

“These extremists know that,” she says. “They’re part of a larger movement to try to win back the hearts and minds who were lost in the fight for marriage equality. When people met Edie Windsor and Jim Obergefell and heard [their stories], they got it. Americans said ‘love is love.’”

“This effort to create some sort of opposition between equality and Christianity is a real attempt to reverse those wins,” Robertson adds.

Recent polling from the Public Religion Research Institute (PRRI) shows that nearly two-thirds of Texans (64 percent) are in favor of fully inclusive nondiscrimination protections for LGBTQ people. In the Austin-Round Rock metropolitan area, support is even higher: 78 percent of residents believe it should be illegal to fire someone or deny them housing because of who they are.

Samantha Smoot, interim director for Equality Texas, adds that the majority of Texans already believe discriminated against queer and trans people is illegal. Thirty states in the U.S., however, have yet to enact such protections at the statewide level.

“It’s time to change that by passing comprehensive nondiscrimination protections this year,” she says.

But should the eight pieces of legislation targeted by conservatives fail to become law this year, it’s not a sign the religious right has won. It’s a reminder that despite some progress in the 2018 midterms, Texas remains one of reddest states in the country.

Although Democrats picked up 12 seats in the Texas House during the November “Blue Wave,” both the House and Senate are controlled by Democrats. The state’s Republican governor, Greg Abbott, soundly defeated former Dallas Sheriff Lupe Valdez in Texas’ gubernatorial contest. He beat the out lesbian Democrat by 13 points.

Abbott is no friend to LGBTQ people. In addition to calling a special session of the Texas Legislature in 2017 to force through an anti-trans bathroom bill, he was a staunch opponent of San Antonio’s nondiscrimination ordinance. While running for governor in 2015, a petition on his campaign website claimed the pro-LGBTQ protections “put religious liberty at risk” and “[violate] the Texas Constitution, which defines marriage as the union of one man and one woman.”

“The ordinance would not prevent discrimination; it would impose it by stifling speech, repressing religious liberty and imposing burdens on those who hold a traditional view on human relations,” the webpage added.

It’s unlikely his views have changed since then.

But for anyone who remains concerned that Texas Democrats want to ban Christianity, they have a message: Read your Bible.

“I am a Christian,” Farrar says. “The Bible I read talks about loving thy neighbor and taking care of your brother. My faith doesn’t condone discrimination. I think sometimes people cloak their prejudicial views under a veil of religiosity.”