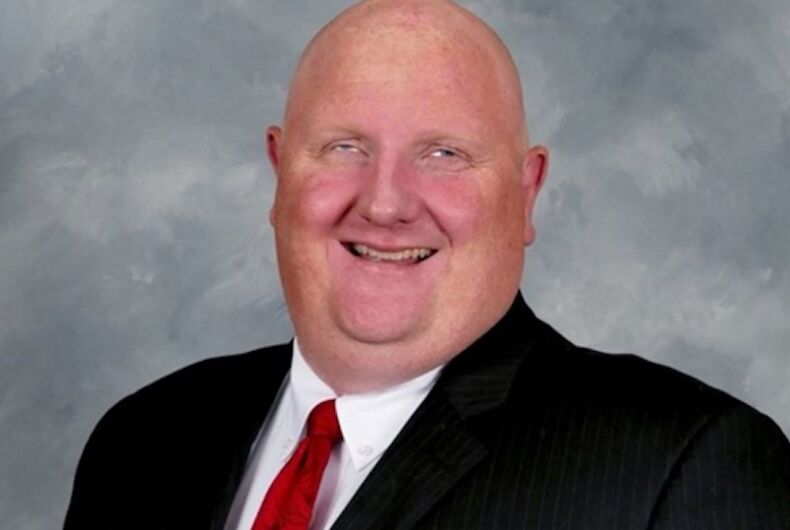 On Thursday, February 7, the state legislature held a hearing on a bill that might’ve affected cities that have passed LGBTQ anti-discrimination protections.

When Porterfield, who is also a minister, asked about this aspect, he said, “I wanted to say [LGBTQ anti-discrimination protections] was one of the most divisive issues I ever saw … and I watched people’s rights be trampled over consistently to push a certain behavior.”

He called anti-discrimination protections “bigoted,” “intolerant,” “discriminatory… nonsense” and “a travesty … against people who have either religious convictions or who don’t want to run their business the way a socialist-left agenda wants us to run it.”

“[Yiannopoulos] was on what he referred to as ‘The Dangerous F*gg*t Tour,’ and the LGBT stormed that building and did $200,000 worth of damage because he didn’t line up with their ideology,” Porterfield said. “The LGBT is the most socialist group in this country. They do not protect gays. There are many gays they persecute if they do not line up with their social ideology.”

The 2017 protestors against Yiannopoulos in Berkeley, California weren’t just LGBTQ-identified and the violence surrounding his talk caused an estimated $100,000 in damage.

Luckily, Porterfield’s more liberal colleagues called out his bigotry and the hearing left the cities’ non-discrimination protections in tact. But the next day, Porterfield doubled-down on his queerphobia.

In an interview about his inflammatory comments with the Charleston Gazette-Mail, he said, “The LGBTQ is a modern day version of the Ku Klux Klan, without wearing hoods with their antics of hate.”

“He also called the gay community a ‘terrorist group’ and said he is being ‘persecuted’ by the gay community in retaliation for his remarks, including receiving threats on Facebook and voicemails,” the Gazette-Mail reported.

The conservative right has long presented LGBTQ rights as opposed to religion and free speech even though many churches and religious denominations support LGBTQ civil rights. A 2014 MSNBC poll showed state support for same-sex marriage at a low 32 percent.

The state Republican party has declined to comment on Porterfield’s statements. State Democrats have called on Porterfield to resign.

This all-queer pro-wrestling event is pummeling homophobia into submission