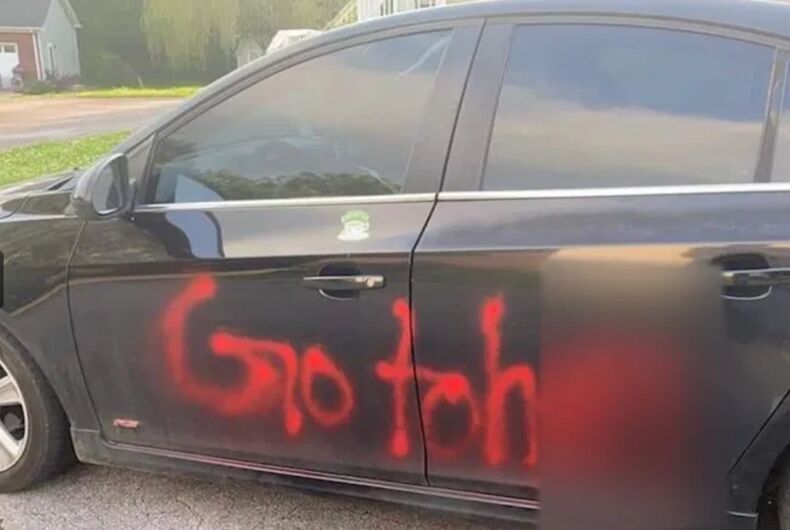 The vehicle was spray-painted with an anti-LGBTQ slur on the other side.Photo: Screenshot

A young woman in Tennessee was targeted by a “slick” vandal that scrawled an anti-LGBTQ slur on her car. The perpetrator also wrote “Go to hell” on the other side of the vehicle.

While most vandals strike at night when they can hide, the person who spray-painted the car did it in broad daylight.

“It’s extremely disappointing and hurtful to the community in Columbia,” her neighbor, Caleb Banks, told WREG. “It was a rather slick move especially in broad daylight. I’m pretty shocked they went after somebody without any type of pride or LGBT stuff on their vehicle. Other people in the neighborhood have rainbow flags, so it was kind of weird to see I feel like maybe it was a targeted attack.”

Both banks and the unnamed victim belong to a local LGBTQ group.

“This isolated occurrence of homophobic slurs does not define who we are as a community, and I condemn them in the strongest terms,” Columbia Mayor Chaz Molder said. “We are a community that is welcoming to all people, and as Mayor, I will continue to work on greater compassion and inclusiveness for all people, including the LGBTQ+ community.”

Authorities are asking anyone who lives nearby with cameras or a Ring video doorbell to assist police by checking the footage to see if they captured the vandal attacking the young woman’s car.

“We are not some different type of person or monster that we are portrayed to be, we are always going to be here and we are human too,” Banks said. “We are your friends, we are your neighbors, your family.”

Earlier this month, a white woman in Alcoa, Tennessee accosted two young girls painting a Pride flag mural on a local bridge, shouting slurs and spray-painting over the mural with grey paint.