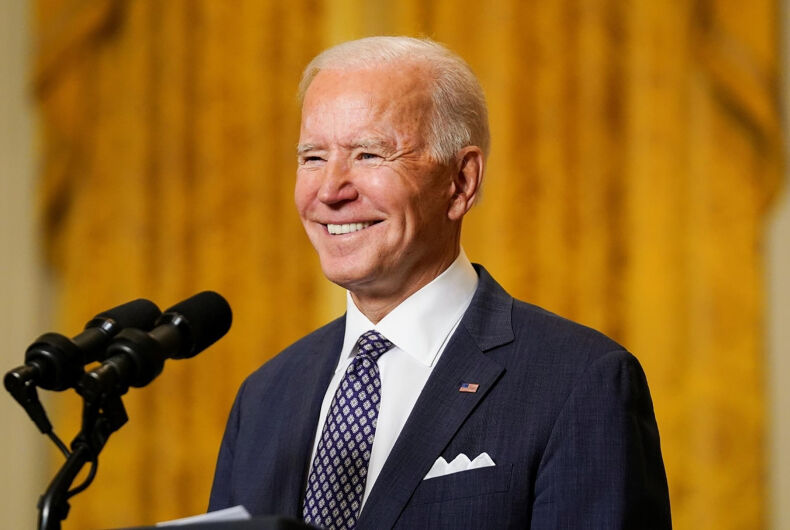 The Department of Education (DOE) is expected to announce protections for LGBTQ students in an opinion on Title IX, which bans discrimination “on the basis of sex” in schools.

The decision could have an impact on how transgender students are treated in schools when it comes to participation in sports and the use of gendered facilities, and experts warn that states could rebel against the Biden administration and refuse to implement it.

Related: Barack Obama saddened by attacks on trans youth: “It breaks my heart”

“Students cannot be discriminated against because of their sexual orientation or their gender identity,” Secretary of Education Miguel Cardona told the New York Times about the new rules, which are expected later today.

Almost exactly a year ago, the Supreme Court ruled in Bostock v. Clayton Co. that the ban on sex-based job discrimination in the Civil Rights Act of 1964 also bans anti-LGBTQ job discrimination, because it’s impossible to discriminate against LGBTQ people without taking their sex assigned at birth into account.

When President Joe Biden got into office, one of his first acts was to sign an executive order saying that Bostock‘s reasoning applies to all federal civil rights laws and executive departments should look for ways to implement it.

Now – after dozens of states have either tried to pass or successfully passed laws to ban transgender girls from school sports – the DOE is set to say that federal law bans schools from discriminating against LGBTQ students. This is similar to the DOE’s stance during the Obama administration, which former Secretary of Education Betsy DeVos rolled back almost immediately after Donald Trump took the White House in 2017.

Cordona did not say how the DOE would deal with states that are passing laws to ban transgender girls from participating in school sports.

“The reality is each case has to be investigated individually,” he said. He added that schools should “not wait for complaints to come to address these issues.”

LGBTQ advocates – and Biden himself, in a second executive order banning anti-LGBTQ discrimination in schools – argue that Title IX protects transgender student-athletes rights. Both transgender and cisgender girls are girls, they argue, and telling one group of girls that they can’t play sports simply because of their sex assigned at birth is exactly the type of discrimination “on the basis of sex” that Title IX prohibits.

Enforcing the law could be difficult with states openly defying the Supreme Court’s and Biden administration’s reasoning.

“Some schools, especially in the states where there is legislation [banning trans girls from sports], will simply ignore what the federal government says,” said Boston College professor R. Shep Melnick, who wrote The Transformation of Title IX: Regulating Gender Equality in Education, a book that analyzed Title IX. “And then it becomes a question of whether the federal government wants to take enforcement action, which I think they may be somewhat reluctant to do.”

Cordona said that the new rules show that the Biden administration will not tolerate anti-LGBTQ discrimination in schools, even as he has not publicly said whether the DOE will bring litigation to enforce Title IX.

“This is, really, clarity around how we interpret it,” he said. “We need to make sure we are supporting all students in our schools.”

Pride in Pictures: Reuniting with friends