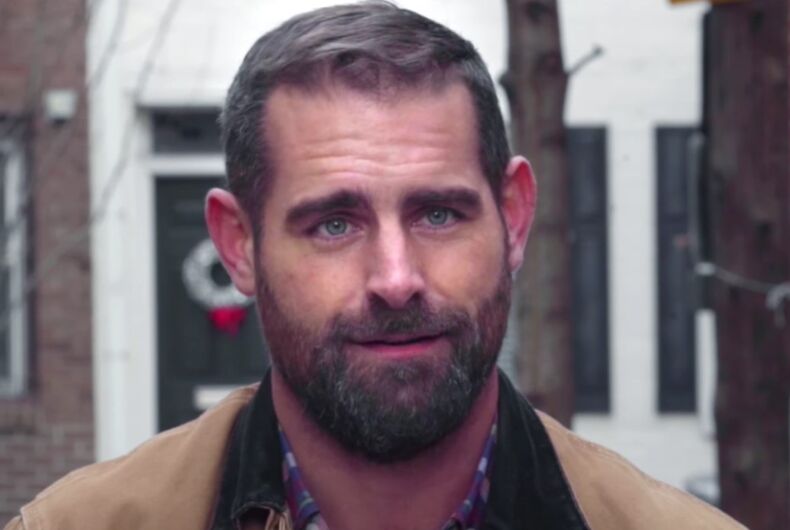 In 2012, state Rep. Brian Sims (D) made history as the first out gay member of the Pennsylvania legislature. Now, the progressive candidate for Lt. Governor could break yet another barrier and become the state’s first out leader elected statewide.

“One of the great impacts of having LGBTQ people in office is showing people that authenticity often can carry the day,” Sims told LGBTQ Nation.

“Many of us grew up in eras where positions like mine were reserved for white, cisgender, straight, privileged people, and yet we’re proving every single day that the authenticity we bring to the table as LGBTQ people is incredibly valuable and that Americans see value and are willing to support it.”

After 10 years in the State House, I’ve taken the lessons that my parents taught me & reinforced them in my work as a legislator: to take responsibility, commit to service, be courageous, & push for fairness.

I’m ready to take these values to lead the Commonwealth. pic.twitter.com/lcNmYQghgr

The LGBTQ Victory Fund, which recently endorsed Sims, called him “one of the most visible out elected officials in the United States.

Currently serving his 5th term as a state representative, Sims said he is running for higher office because Pennsylvania is in dire need of more progressive leadership, something he has unwaveringly worked to provide in the state’s Republican-controlled legislature.

“What I’ve learned is the Lieutenant Governor position is one of the areas where Pennsylvanians are still able to elect a progressive Democrat in a state that oftentimes forces us to choose more moderate or more centrist Democrats,” he said.

“It’s disappointing that Pennsylvania lacks so much progressive legislation and also a real opportunity for me,” he continued. “I have spent my ten years leading the charge on women’s rights, reproductive rights, racial and ethnic justice, certainly LGBTQ civil rights, issues of the environment, and even immigration.”

Currently co-chair of the LGBTQ Equality Caucus, Sims said he is proud of the coalition building he has done around LGBTQ rights. He believes one of his biggest strengths is collaborative leadership. At the same time, though, he doesn’t believe in bipartisanship simply for the sake of bipartisanship.

Pennsylvania Republicans, Sims continued, are among the most conservative in the nation.

Sims is well known for his outspokenness and passion. In 2018, for example, he posted a photo of himself flipping off Mike Pence during a visit to Philadelphia by the former Vice President. Just recently, Republicans cut off his mic during a debate about reproductive rights, during which he pointed out that the Republican caucus is “100% white.”

Before being silenced, Sims vehemently criticized the Republican-dominated legislature for a “grossly, predictably misogynistic agenda” and said it “has done more to remove mask mandates, strip executive emergency powers and overturn free and fair elections than we have to make strategic investments in Pennsylvania’s women, children, and families.”

After House Majority Leader Bryan Cutler (R) cut off the mic, Sims did not back down, declaring, “Your boos mean nothing to me. I’ve seen what you cheer for.”

📽️ @PAHouseGOP leader has meltdown on House floor after it was raised that his caucus is 100% white in a chamber that is 70% male while pushing bills that hurt women's health, especially Black and brown women.

He had it stricken from the record then they shut down the floor. pic.twitter.com/xy1qwI8eYG

Yes, I too am 100% white and a male and if you think that disqualifies me from talking about racism and sexism, instead of requires me to speak out against them, you need to revisit your values, not mine.

Sims said his fire is fueled by the way he was raised. His parents, two now-retired Army lieutenant colonels, had a relationship based on equality.

“I know what it looks like when people are treated well, when they are respected, when they are protected and how much we can all proliferate when that happens. That’s a world I want to live in, and I happen to have been born with a bunch of the tools that can help make that happen.”

PRIDE: Oh honey, if you think I’m a victim you’ve not being paying attention. Maybe more reading and studying and less pretending you know anything about control or dependency. My rights have nothing to do with your God. If you think so, you’re just our version of the Taliban. https://t.co/jWNSLjn7ra

“Through no work of my own,” he continued, “I woke up this morning in a body in this country that’s going to afford me privileges, and that’s wrong, and the best thing I can think to do with those privileges is to use them to combat other people who are using them wrongly.”

Sims wants voters to know that his life’s work is equality, not politics.

#TransMenAreMen is trending on Twitter & it couldn’t be more heartwarming