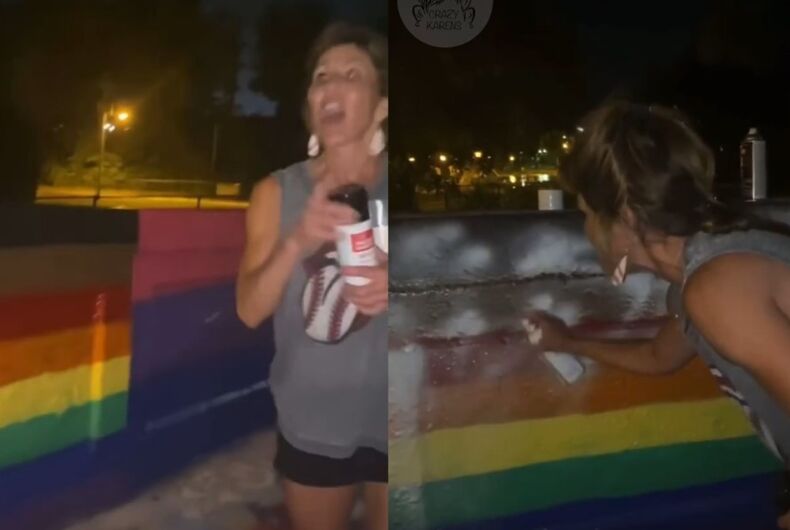 The woman - who is totally not bothered at all by LGBTQ people - berated the lesbian teen couple and defaced their rainbow flag.Photo: Screenshot/Instagram

Video of a woman yelling at a teen couple while spray-painting a Pride mural has gone viral.

“Y’all aren’t even different anymore,” the white woman said in a video taken Tuesday night in Alcoa, Tennessee. “Y’all are trying to stand out.”

“I could give a shit less about what you are and what you think you might want to be,” she said as she started defacing the rainbow mural.

Jasmine Martinez, 17, and Carmen McClain, 16, said that they were painting the mural on a section of a bridge where graffiti is allowed when a woman pulled over and got mad at them.

“She had driven by and told us to stop and told us that we were doing terrible things to the bridge,” Martinez told The Daily Times of Blount County.

The woman left and then came back with spray paint and started to paint over their Pride flags, saying that she doesn’t care that they’re LGBTQ but “you’re not going to go express it all over everything.”

“You’re sick,” she continued. “You’re not gonna do it. You don’t pay taxes. You’re probably an immigrant here.”

The teens gasped when she made the anti-immigrant comments, a probable reference to their skin color.

“Oh god, was that offensive to you?” the woman asked sarcastically. “Too bad. Because guess what, I live here. I pay taxes. I’m a grown woman. I have two kids. You’re not gonna put your shit all over everything all the time.”

“Pretty sure my English is better than yours,” one of the teens retorted as the woman proved how little she is concerned with LGBTQ people by spray-painting the rainbow.

The woman ranted about how LGBTQ people are making families fall apart, talking about how people eat too much fast food and look at computers all the time because parents aren’t “present” in their children’s lives.

“Why aren’t you with your kids right now?” one of the teens asked.

After the video ends, Martinez said that the woman told them that she was going to paint an American flag over the Pride flag. When one of the teens told her that she didn’t bring the right colors to do that, she told them they’re being “disrespectful.”

“It made me feel so devastated that in our community people act like that,” McClain later said. “We were just trying to spread positivity with those flags we painted.”

On Wednesday, the teens returned to the bridge with friends and painted rainbow, transgender, bisexual, and pansexual Pride flags.