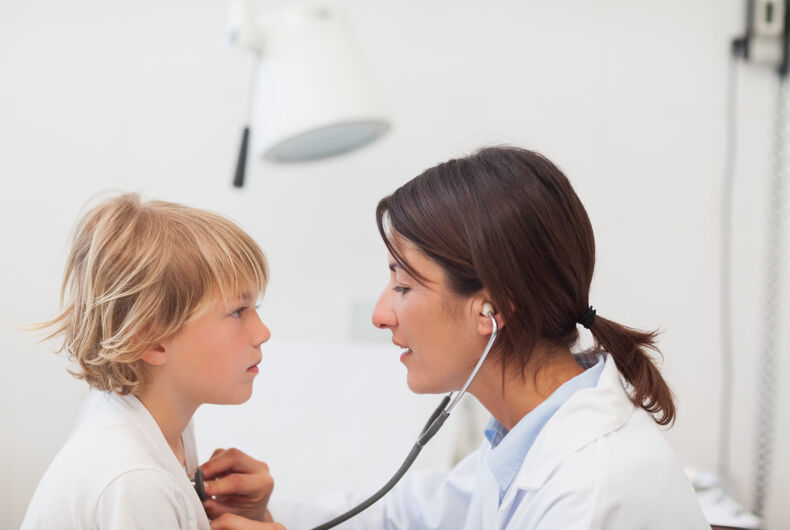 Tennessee has been leading the nation in passing and enacting anti-trans legislation all of 2021. They’ve already enacted a ban on trans youth in sports and several anti-trans bills have passed the General Assembly, with some pending action on the governor’s desk.

Now, they’re trying to enact an anti-trans measure while bypassing the bill-making process, where they would have to rehash the issues over and over. The state legislature has approved an amendment to a bill, which is itself amending a different bill, to make it law to claim “Standard medical practice does not involve prescribing hormone treatment.”

The original purpose of Tennessee Senate Bill 126 and House Bill 1027 was to amend “the training required in medication administration” for medically-trained staff caring or supervising children across the state. The bill had two sections that were one section each, and simply increased the hours of training required from six to seven.

Then, once the bill was in the House Health subcommittee and the Senate Health & Welfare committee, the bill’s sponsors added amendments to their proposals, at the same time. Both amendments erased every section of the bills and replaced them with a proposal to exclude “hormone treatment” from healthcare treatment options for trans people under 18.

That would include puberty blockers, which are hormones that delay the onset of puberty so that transgender teens, their parents, and their doctors can have more time to figure out a course of treatment before puberty starts changing their bodies in permanent, life-altering ways associated with their sex assigned at birth.

The only exception outlined in the legislation is “for diagnoses of growth deficiencies or other diagnoses unrelated to gender dysphoria or gender incongruency.”

The terms “gender dysphoric” and “gender incongruent” are used to describe transgender or people who identify elsewhere on the gender spectrum. It would apply to “prepubertal minor,” which the state defines as a minor in “Tanner stage 1 development,” a puberty stage that refers to the phase of puberty before physical changes take place.

The “amendments” were accepted by their respective committees. The Tennessee Senate approved it on April 8, and the House approved it by voice vote and combined it with the Senate version on May 3. It passed by a completely partisan vote, with Republicans supporting it through both chambers but zero Democrats.

The amendments claim that since “the Department of Health and health-related boards can accommodate the provision of the proposed legation within existing resources,” that the “fiscal impact” of the bill will be is estimated to be “not significant.”

“Tennessee could enact five anti-LGBTQ laws this session, including the anti-trans sports ban that’s already law in the state,” the Human Rights Campaign said in a tweet.

While other states have had challenges to their anti-trans legislation on the chamber floors of the legislature or had governors hesitate about signing anti-trans laws, Tennessee’s legislature and Gov. Bill Lee (R) have passed several bills that harm LGBTQ people unfettered.

That includes already enacting a ban on trans youth in middle or high school from participating in sports. Active bills are currently seeking to force businesses to post signs if they allow trans people to use their bathroom, and another bill would require schools to notify parents if sexual orientation or gender identity are going to be mentioned in class.

There are also proposals to make the Bible the Volunteer State’s official book, ban books with LGBTQ people from school, give cisgender students the right to sue a school if they’re not given a “reasonable accommodation” to not share facilities with trans people, and limitations to sex education within the state.

how it was originally submitted vs how it passed #hb1027 #sb126 https://t.co/NJZaYzWUnd pic.twitter.com/x5m5nipU41

I saw a problematic transgender athlete on television 45 years ago