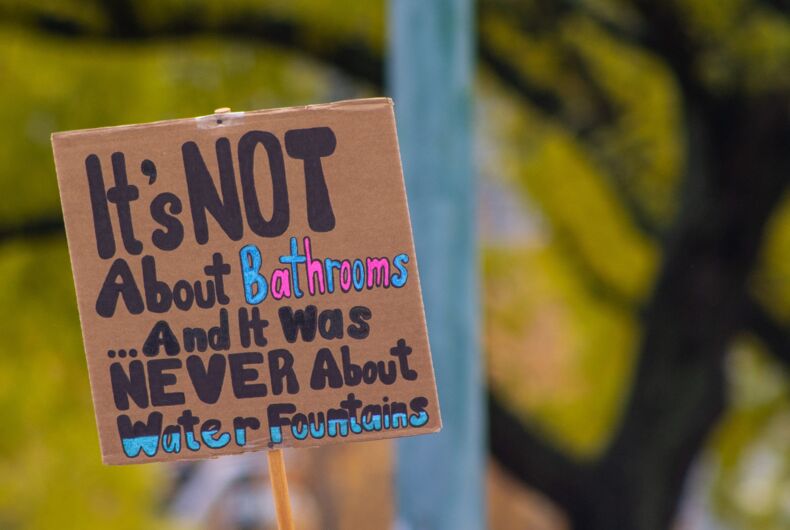 A Tennessee Republican has introduced a bill that would allow cisgender students to sue the school if they’re not given a “reasonable accommodation” if they don’t want to share facilities with trans people.

Rep. Jason Zachary (R) introduced H.B. 1233, which would create a complicated system for addressing bathroom, locker room, and other facilities use at public schools in order to give administrators “a clear path forward.”

In a year when Republicans in dozens of states are trying to ban transgender girls from playing school sports and ban doctors from prescribing puberty blockers to transgender youth (but not cisgender youth), Zachary said that a high school “reached out to me, they are having to [deal with] a problem with boys using the girls’ restroom.”

This is not true – no one is asking schools to let boys use girls’ restrooms. The issue is about transgender and cisgender people of the same gender sharing facilities.

“And they feel like they are handcuffed, and there’s not much they can do about it,” Rep. Zachary said. “This bill takes care of that. It stops all that and just provides absolute clarity.”

That clarity, though, seems more complicated than just letting students use the restroom associated with their gender.

Cisgender students would be allowed under the bill to submit a request for a reasonable accommodation if they say they’re not comfortable with sharing facilities with transgender people. The request must be submitted in writing.

If they later “encounter a person of the opposite sex in a multi-occupancy restroom,” they can sue the school for not providing them with a reasonable accommodation. The bill says sex is “determined by anatomy and genetics existing at the time of birth.”

Transgender people would be required to use the bathroom of the opposite gender, according to his bill. But noticing that that could cause problems – including bullying and violence – Zachary said that schools would have to provide single-occupancy facilities.

“If they were born as a boy, they will use a single-occupancy restroom,” he said, referring to a hypothetical trans girl.

Of course, many schools don’t have single-occupancy restrooms. Even those that do might not have enough if the school is sprawling. Moreover, the bill covers changing rooms and sleeping accommodations, so schools would have to construct single-occupancy versions of those for their trans students.

What could happen is what student and activist Gavin Grimm encountered at his school in Virginia, where he was told to use the bathroom in a closet because the school didn’t have any single-occupancy facilities for him to use. He later sued his school district.

Chris Sanders of the Tennessee Equality Project said that the bill is an “attack against trans students and trans youth” because it tells people, “Hey everybody, there’s this category of people that we will protect you from if you want to be protected from.”

“Trans students are at school to learn,” he told The Tennesseean. “And just like everybody else who has to go to the bathroom, that’s what they are going in there for. They are not going in there to bother anyone.”

Complicating Zachary’s bill even more is that it would go against federal law. President Joe Biden signed an executive order that banned “discrimination on the basis of sexual orientation or gender identity” in schools earlier this month.

The bill was introduced in the state senate as S.B. 1367. Tennessee is also considering a bill to ban transgender girls and women from school sports.

While a slew of bathroom bills were introduced in state legislatures across the country several years ago, few state Republicans are trying to pass them this year. Indiana is also considering a bathroom bill.

Tennessee Republicans have been trying to pass them since at least 2012.

I escaped to the United States from Jordan. Nobody deserves to live in fear every day.