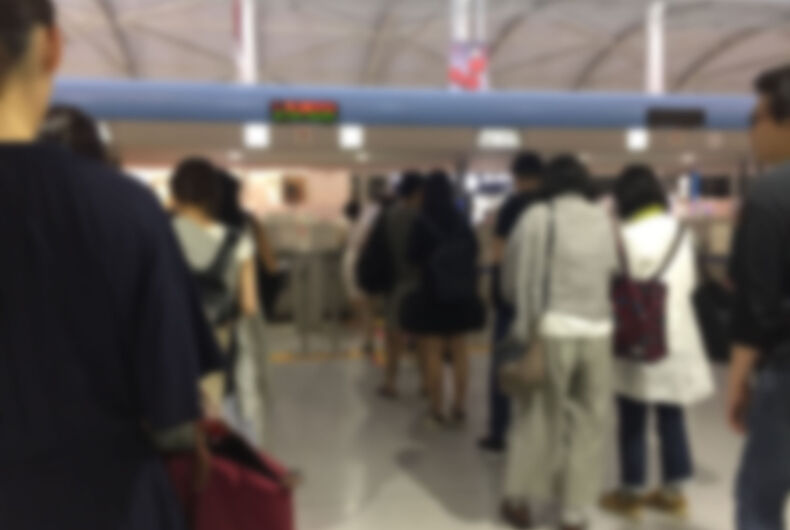 There are two things we can’t choose as humans – where we are born and our sexual orientation. Many of us are fortunate to be born in societies that embrace differences and accept diversity, but far more of us find ourselves in places that reject, shun, and kill us, simply because we are different.

I was born in Jordan, in the heart of the Middle East. Predominately Muslim, Jordan was not the best place for a gay guy like me. Islam does not tolerate homosexuality; it is even punishable by death in some neighboring countries.

Related: Man proposes to his boyfriend 40,000 feet in the air. The other passengers loved it.

Luckily for us, our royal family was somewhat liberal and didn’t conform to such extremist laws. Unfortunately, regardless of what the royal family felt, the culture of denigrating homosexuality and demonizing it prevailed. I depict this culture in detail in my novel The Kingdom’s Sandcastle, which is based on the true events of my life.

While homosexuality is no longer a criminal offense in Jordan, it still carries a heavy social stigma, and the government has very little empathy for members of the gay community. When I still lived there, we were constantly tortured by the cruel social norms that demonize the LGBTQ community. We had to live underground and pretend to be something we are not.

Many people still live this way in my home country. It was either that, living out on the street, or worse. Society believed we were tainted with a horrible, immoral disease, and that we were a scar on our perfect two-faced society.

Soon after my sexual awakening, my family and I took a trip to California. It was nothing short of a revelation for me to see queer men just out – walking proudly by themselves or hand in hand with their partners all over LA and Orange County. It’s hard to express how truly shocking this was, to see that there was somewhere I could be myself.

I knew instantly that the United States would be my escape plan. I had to get myself to California.

I slowly introduced my parents to the idea of pursuing a college degree overseas. Luckily for me, they were on board, and so I thought my plan was going to work. I ended up in the pre-med program at UCSB and started studying biology. My mother was happy, but I could see that she was also sad at the thought of me moving so far away. I tried to keep her spirits up. We would joke that when I became a plastic surgeon, I would give her a new face for her 60th birthday present!

With college starting, I found myself on the beautiful beaches of Santa Barbara. I was free, far away from that institutional oppression and persecution I was running from. Unfortunately, this was a temporary escape. Just two months after my arrival, I found myself on a flight going back home to Jordan.

A false rumor that I was addicted to drugs had reached my Dad through vindictive family members back home, and he pulled me out of school. Just like that, I was back in the prison of Jordan. Once there, I was blackmailed into servitude by a man threatening to tell my family I was gay, and I endured years of abuse before I escaped to America again.

The United States has long been a beacon of hope to millions of immigrants seeking a better life and society, and that was certainly the case for me, but I was exceedingly lucky.

I packed a small suitcase and hid it in the basement then waited until nobody was home. Having told my father I was going to a movie with friends, I snuck out while he was gone and headed straight for the airport. I was fortunate enough to have a green card that gave me access to the U.S. and to the better life I longed for after my brief stint in school.

Even though the green card was expired, I tried to re-enter the country. The fact that I was already in the system helped me plead my case to the immigration officers at the airport where I was detained. Ultimately, they allowed entry, even though they had the right to deport me.

Right now, there are hundreds, if not thousands of LGTBQ asylum seekers being turned away from our southern border. I understand their desperation, the fear they live with daily, and the burning desire to live a comfortable and free life.

These people need to be allowed entry while they await their asylum hearings, not only to protect them from the predatory environments that have sprung up at the border, but because it is the right thing, the humanitarian thing, to do. The officers who let me through recognized this, but I am the exception, and that needs to change.

Nobody deserves to live every day in fear.

After fleeing Jordan, Luai Qubain, author of The Kindom’s Sandcastle, received a degree in petroleum engineering from the University of Oklahoma, worked with an international oil and gas company in Denver, and founded his own energy consulting firm. He lives in Denver with his husband, their three shelter-rescued cats, and their Old English Sheepdog.