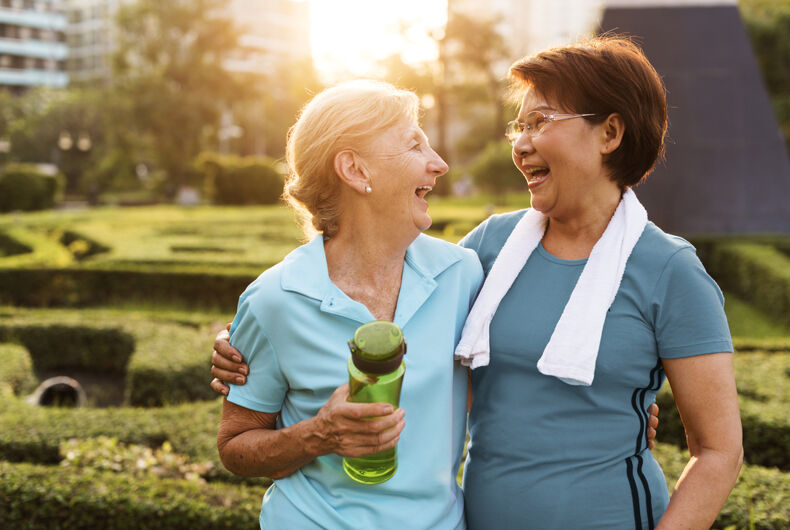 A new law is in place throughout the state of New Jersey that sets new protections for LGBTQ people and people living with HIV that reside in long-term healthcare facilities.

Gov. Phil Murphy (D) signed S.B. 2545, originally Assembly Bill 2488, into law on March 3. Lawmakers are dubbing the new legislation as the “LGBTQI+ Senior Bill of Rights” as it “establishes certain requirements concerning rights” for senior citizens being cared for in the Garden State.

The bill unanimously passed through the Democratic state senate and only had one nay vote in the assembly.

“Today’s bill signing underscores this commitment to our LGBTQI+ older adults and people living with HIV in long-term care facilities by providing critical protections from discrimination. No one should ever feel ashamed for who they are, and everyone should be able to live with the dignity and equality that they deserve,” Gov. Murphy said in a statement announcing its signing.

The state’s health commissioner Judith Persichilli commented, “This new civil rights law ensures that LGBTQI+ residents in long-term care facilities have equitable access to health care and provides the same legal protections as everyone else regardless of their sexual orientation or health status.”

The law officially bans discrimination on the basis of sexual orientation or gender identity at long-term care facilities in the state. It also outlaws nine other actions that would be considered discrimination if taken by healthcare facility workers based on a resident’s identity.

They include “denying admission to, transferring, discharging, or evicting” someone, assigning (or reassigning) of someone’s room, not honoring a resident’s request for change in the room assignment, “repeatedly failing to use a resident’s chosen name or pronouns despite being informed,” preventing them from using a restroom, denying someone their chosen attire, clothing or accessories, “providing unequal medical or non-medical care,” declining to provide care, and restriction of visitation.

A 2018 survey conducted by AARP found that more than 60 percent of LGBTQ adults over 45 years old have concerns about long-term care facilities and possible neglect, abuse, harassment and limited LGBTQ-specific services.

Further, last year’s National Poll on Healthy Aging, conducted by the University of Michigan and sponsored by AARP, asked more than 2,000 adults aged 50 to 80 about their experiences. A shocking 82 percent said that they experienced at least one form of ageism in their day-to-day lives.

Assemblywoman Valerie Vainieri Huttle, a primary sponsor of the law in the New Jersey State Assembly, stated, “Many older adults in the LGBTQI+ community have experienced decades of stigma and discrimination. They should not, under any circumstances, feel marginalized in the long-term care center where they deserve to feel at home.

“We’ve worked tirelessly in New Jersey to protect the rights of LGBTQI+ people, but there’s more we can do to combat discrimination in long-term care facilities and ensure all LGBTQI+ residents may grow older with dignity.”

Christian Fuscarino, Executive Director of Garden State Equality, also added, “We know LGBTQ older adults are at greater risk for social isolation, health issues, and poverty, and often have concerns about living in a long-term care facility. For many, they spent their entire lives fighting for the rights we now enjoy today – they deserve so much better. With this bill signed into law, providers at these facilities will be better equipped to care for these vulnerable populations.”

Violators of the law “will be subject to penalties or other administrative actions as are provided by Department of Health regulations,” in addition to relevant administrative, civil or criminal laws.

California has adopted a similar law, and New York has previously attempted to pass a “Bill of Rights” legislation for LGBTQ seniors. Washington D.C. has a similar law under consideration.

We're excited that today, @GovMurphy signed the LGBTQ Seniors Bill of Rights! This is much needed for LGBTQ and HIV+ older people, who are at greater risk for social isolation, health issues, and poverty.https://t.co/n0Vc4gpuqV

Yesterday, I signed the LGBTQI+ Senior Bill of Rights, providing critical protections for our LGBTQI+ older adults and people living with HIV in long-term care facilities.

Everyone should be able to live with the dignity and equality they deserve.https://t.co/d1T359nqbf pic.twitter.com/4SC0UnQnWk

I escaped to the United States from Jordan. Nobody deserves to live in fear every day.