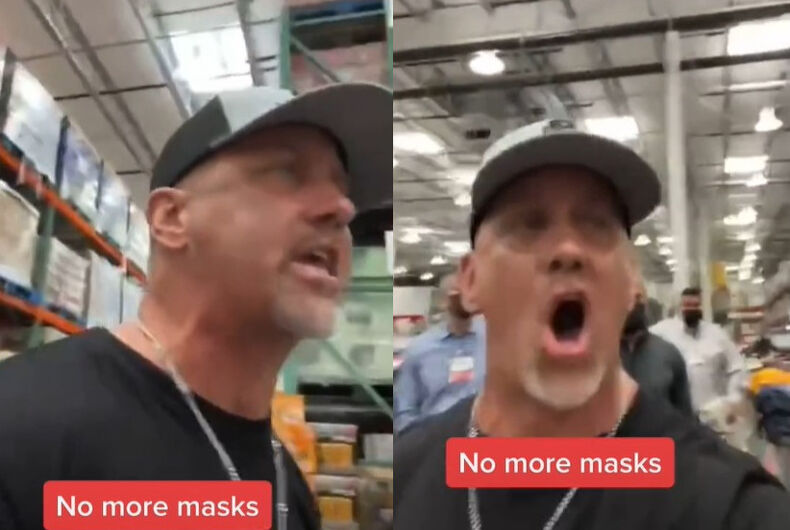 "ThaMagaman" believes real men fight for their right to get big savings without a maskPhoto: Screenshot/TikTok

A man trying to lead a revolution against the “tyranny” of wearing masks while being escorted out of a Costco was quickly shut down by a crowd telling him to “get out” has become the star of a viral video this week.

Lashing out in frustration, he insulted the other customers’ masculinity. “Where’s the men that will stand for liberty once again?” he asked after no one wanted to join his anti-mask Costco activism.

The clip was uploaded to TikTok by the man himself. He goes by the username “ThaMagaman,” a reference to his support for Donald Trump.

Recording as he’s forced to leave Costco for not wearing a mask, he turned to his fellow shoppers and tried to rally their support.

“Is anybody tired of this tyranny?” he shouted.

“No!” a few scattered voices can be heard shouting back at him.

People started chanting for him to “get out” – of the store, presumably – and ThaMagaman shouted back: “You get out!”

He got more frustrated with his fellow shoppers for refusing to join him as the video proceeds, and he’s escorted out of the Costco chanting “No more masks!”

In one final retaliation against the crowd for not supporting him, he turned to the shoppers and shouted, “In six months, you’re going to be looking for people like me to stand for you!”