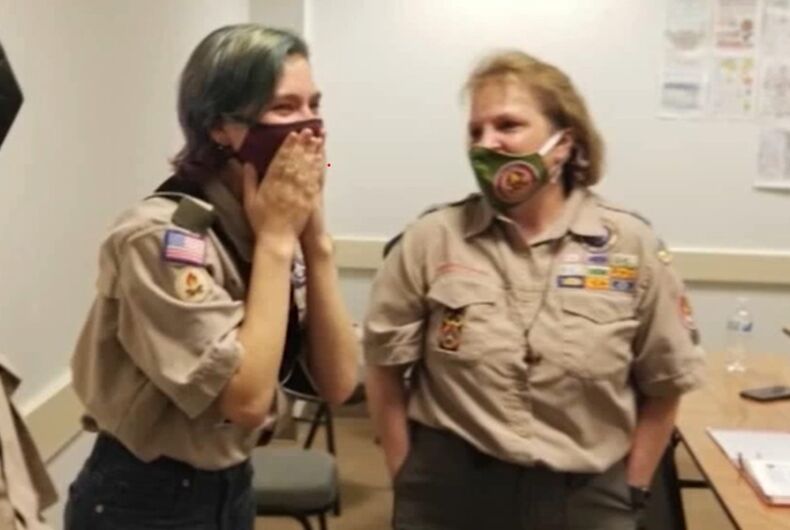 17-year-old Jace King has become the first out transgender Eagle Scout in his small town of Splendora, Texas, and may be one of the first in the country.

King had always dreamed of becoming an Eagle Scout like his brother, but due to the scouts’ ban on transgender boys, he was not allowed to join until 2019.

Related: This 14-year-old teen athlete is like any other kid. She just wants to play.

Because the Eagle Scout award must be earned by the age of eighteen, King had to move quickly.

He worked with two different troops and was able to accomplish this feat in just over two years, despite the fact that it usually takes between four and six. He did all of this while also having to confront discrimination and hate along the way.

“I’ve been berated and looked down upon by older adults who were associated with the scouts, saying that I shouldn’t be there,” King told ABC 13. “That I should be in the Girl Scouts instead.”

ABC also reported that comments had to be turned off on a community Facebook page that shared the news of King’s achievement after so many of them became hateful.

But King’s mom, Micheline King, said that there have also been many positive messages and that her son’s strength has helped change minds.

“I’ve seen a lot of backlash, but truth be told, when Jace became true to themselves, it made them a stronger person. In that right, as they became stronger…wiser people began to accept them just for who they are,” his mother said.

Photos shared with ABC show King beaming with pride as he finally achieves his goal.

As Republicans across the country, including in Texas, continue to target trans youth in discriminatory bills, King hopes his accomplishment can help other trans kids see that they can do anything.

“It doesn’t matter who you are, what you’re born as, or what you identify as, you can make great feats because it is possible for anyone,” he said.

Barriers have been steadily breaking in the Eagle Scouts for the past few years. In 2017, they began allowing transgender boys, and in 2019, they decided to allow girls to join as well, a decision that led to a transgender teen becoming one of the first female Eagle Scouts.

The Boy Scouts of America’s changes to become LGBTQ-inclusive have caused many religious groups, such as the Church of Latter-Day Saints, to disavow the group. Many BSA chapters are funded by religious organizations, but the group pushed on and implemented changes anyway.