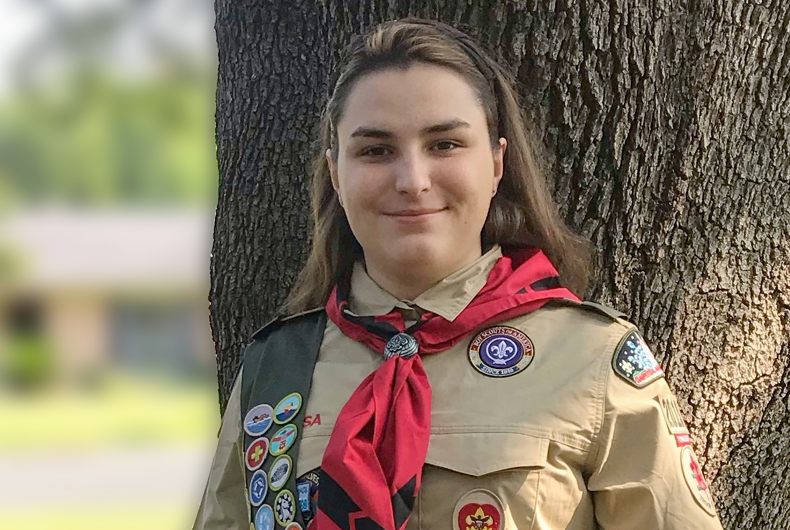 Beatrix Jackman, a 19-year-old trans woman attending the University of Texas at Austin, is one of the first members of the inaugural class of female Eagle Scouts from the state. Jackman was surprised by her scout leader, Charles Mead, when he presented her with her Eagle Scout award and regalia in front of local media at her home.

“I don’t even know what to say, I’m smiling so much that my mask fell off,” Jackman said while receiving them. “Thank you to everybody who has helped me along this path.”

Jackman had been a scout in Boy Scouts since she was in elementary school, but was left with only three options after telling leaders she is transgender: continue to present as a male, scout alone without a chapter, or quit scouting. She chose to leave, although she always wanted to return.

Scouts BSA, formerly known as the Boy Scouts of America organization, has lifted previous regulations that prevented women or LGBTQ people from being part of their organization over the last several years. They began allowing trans scouts in 2017, and female scouts in 2019. Jackman rejoined immediately.

“[I came back] to partially lead the way for other girls like me, but also because I was almost done, and I want this closure,” she told her high school paper as a senior that year.

BSA’s changes to become LGBTQ-inclusive have caused many religious groups, such as the Church of Latter-Day Saints, to disavow the group. Over 70% of BSA chapters are funded by religious organizations, but the group pushed on and implemented changes anyway. The national organization also shifted age eligibility to allow previously-excluded scouts to rejoin and remain eligible.

Scouts BSA chapters around the country will continue to review their female members for Eagle eligibility until February 7. Only 6% of scouts earn the elite Eagle Scout ranking.

Jackman, along with others, will officially become an Eagle Scout on February 8, 2021, the 111th anniversary of the BSA organization’s founding. While COVID-19 may prevent official ceremonies from taking place, scouts will still be able to receive their honors and celebrate their achievements online at home.

To become an Eagle Scout in Jackman’s chapter, one must “earn a minimum of 21 merit badges including several from a list of required topics like first aid, cooking, lifesaving, environmental science, personal finances, citizenship and more,” according to Mead. That’s in addition to crafting a “unique, personalized” Eagle Scout project that causes a positive effect on the community.

Jackman’s Eagle Scout project was to craft and give away over 100 self-made mental health kits to LGBTQ youth through PFLAG Austin. In a note included in the kits, Jackman wrote that “the goal of this project was not just to give you a kit with random items for self-soothing, but to give you ideas of things you could put in the kit so if you are having a problem, you will have access to items that can help you immediately.

“My hope is that the lessons I learned through my struggles will help you too.”

Anna Nguyen, the President of PFLAG Austin, wrote in a statement that the non-profit is “happy to have assisted her in her challenge of becoming one of the first female Eagle Scouts” and “honored to have been a part of that change.”

“Personally, I remember most how much happier Beatrix appeared to be when she was able to present, and more importantly, live in, the gender identity that brings her the most peace and contentment. Human beings are much happier when they’re able to live their life free of society’s strictures on matters such as gender identity,” Nguyen concluded.

In addition to her Eagle Scout achievement, Jackman is set to earn honors from her sorority Gamma Rho Lambda, the city of Austin, and the Texas State House of Representatives. She will also receive honors from PFLAG’s Austin chapter.

Is Trump going to run for President in 2024? He’s considering it.

John Waters gave his collection to the Baltimore Museum of Art. They named the toilets after him.