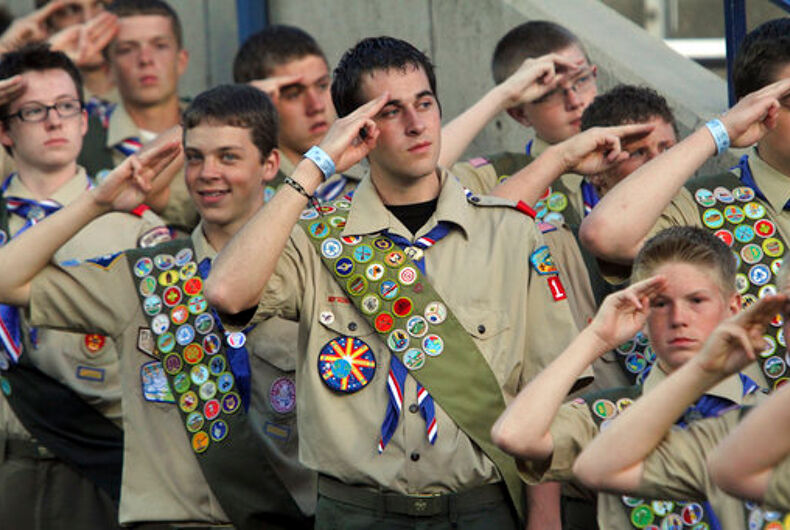 In this July 3, 2010, photo, Boy Scouts salute during the Stadium of Fire in Provo, Utah. The Mormon church, the biggest sponsor of Boy Scout troops in the United States, announced Thursday, May 11, 2017, it is pulling as many as 185,000 older youths from the organization as part of an effort to start its own scouting-like program. Photo: Rick Egan/The Salt Lake Tribune via AP

The Church of Jesus Christ of Latter Day Saints just announced that it would be ending is 105-year relationship with the Boy Scouts.

In a statement, the LDS Church said that the break with the Boy Scouts would be effective at the end of 2019, at which point a new youth program would be introduced by the LDS Church.

“In the new experience, children and youth will be encouraged to focus on setting and achieving goals to develop spiritually, socially, physically, and intellectually as they seek to follow Jesus Christ,” the Mormon Church said in a statement.

“This approach is intended to reduce burdens on families, with greater flexibility to adapt to the needs of individuals and families around the world in many different circumstances.”

The relationship the Boy Scouts have with the Mormon Church is stronger than with any other religious group. 19% of the 2.3 million participants in the Boy Scouts are Mormon, and around 10% of scouting councils will be affected in a “significant way” by the departure of the LDS Church. All three of the scouting councils in Utah are strongly associated with the LDS Church.

The decision to part ways was already in the works well before last week’s announcement that the Boy Scouts would be changing their name to Scouts BSA as girls were welcomed into all levels of the program.

Tensions with the Boy Scouts started to rise in 2015 when the scouts announced that they would allow gay people to be troop leaders. The LDS Church initially said that it was “deeply troubled” by the decision, and later said that it received assurances that it would be allowed to ban gay troop leaders in programs it sponsored.

Last year, after the Boy Scouts announced that girls would be allowed to participate, the LDS Church pulled 185,000 14- to 18-year-olds out of the program.

Matthew Bowman, a history professor at Henderson State University, said that gay troop leaders was one of the factors in the LDS Church’s decision to create a new scouting program.

“The church is wedded very much to traditional gender roles and they see the Boy Scouts of America increasingly move away from that,” he said. “That means that they have come to see it as less of a hospitable place.”

Woman charged with hiring a man to rape another man

Cynthia Nixon’s new campaign slogan is ‘Vote for the homo, not for Cuomo’