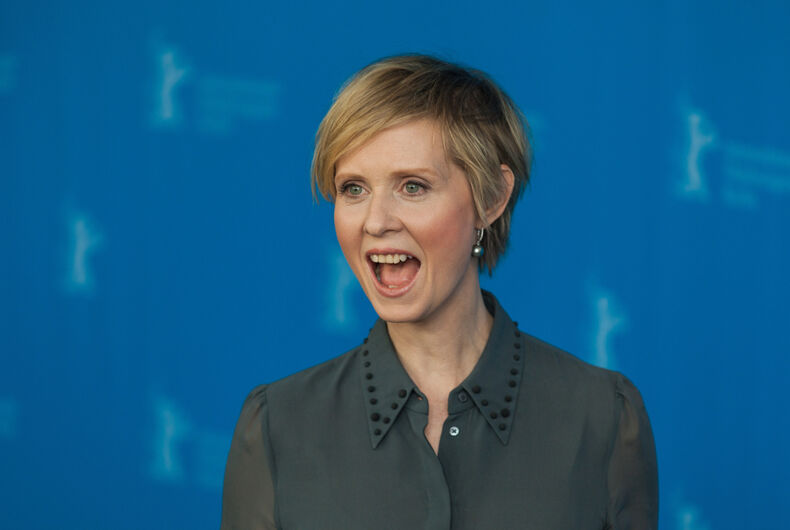 Former Sex and the City actress turned would-be politician Cynthia Nixon has a clever new campaign slogan inspired by her opponent. The out candidate debuted “Vote for the homo, not for Cuomo” to laughs and gasps at the annual Legislative Correspondents Association show.

The slogan is a twist on an infamous anti-gay slogan New York Governor Andrew Cuomo coined for his father’s campaign in 1977 against former New York City mayor Ed Koch. Cuomo has denied his role in creating posters that read “Vote for Cuomo, not the homo.”

Koch, a closet case who feared responding to the AIDS crisis for fear it would out him, went on to win the election.

“Andrew Cuomo is known for dirty politics but I have to give credit where it’s due,” Nixon told the audience. “His history of cutthroat campaigns, helped inspire my campaign’s new slogan.”

She also took a few swipes at Cuomo’s centrist politics and former NYC Council Speaker Christine Quinn’s description of Nixon as an “unqualified lesbian,” saying, “Cuomo thinks that I should stick to acting, but after seeing him try to play the part of a progressive, I think he should stick to politics.

“His performance as a progressive has not been very convincing of late. You might say he’s an unqualified thespian.”

“When my wife and I… started dating in 2004 I wasn’t sure how people were going to react. Would it affect my career negatively? What was the best way to let people know, and when? I was worried about it,” she said as the audience warmed up to her humor.

“But after some agonising, I just came out, and it turned out to be fine and not such a big deal at all. It’s not healthy when you feel like you have to hide who you are, and I wouldn’t wish that on anyone. And that’s why tonight I think it’s time for Andrew Cuomo to come out as a Republican.

“The rumours have been out there for years, he’s not fooling anyone. Who knows why he stayed in the closet this long? Maybe he thought it would hurt his career, maybe he was afraid of disappointing his father.

“It must not be easy growing up feeling like you’re different from everyone else, so on behalf of someone who has been there, I just want to say Andrew, it’s okay to come out and live openly as you are. Your donors won’t love you any less.”