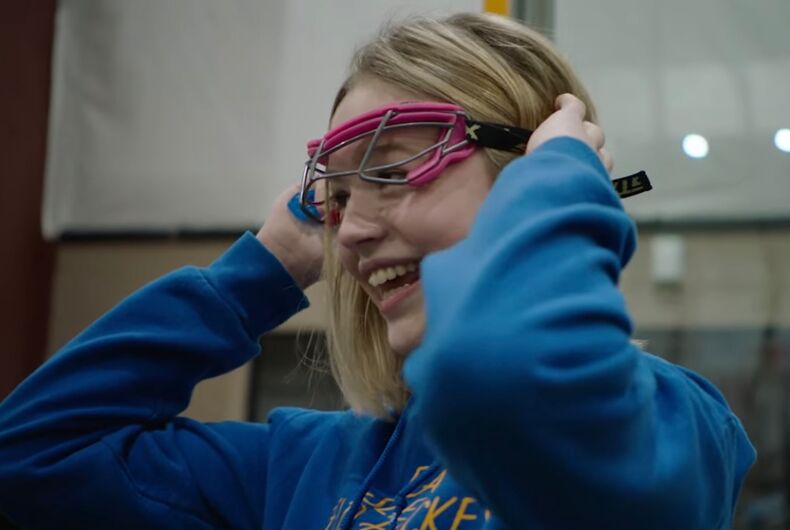 Rebekah is just trying to be a typical teenager – enjoying her youth and having fun with her friends and family. But she, like several other trans people across the country, is busy having to advocate for herself and others as conservatives try to pass anti-trans legislation.

While they are limiting trans people’s access to healthcare, classrooms, and public facilities, a go-to for lawmakers looking to join the anti-trans bandwagon has been to try to ban trans girls from school sports. Rebekah, her mom, and her friends explain how this could affect them.

The sit-down is featured in the latest spot by the Human Rights Campaign.

“There’s so much deliberate misinformation circulating out in the world about what it means to be a trans kid playing sports. Rebekah’s story is a story that more people need to hear,” the advocacy organization stated with the video’s release.

“She’s a big sister, an eager student, and she loves playing sports as much for the chance to be with her friends as the opportunities to be in and learn from competition.”

Her mom, Jamie Bruesehoff, says, “Rebekah’s really good at a lot of things. She aces her schoolwork with very little effort. She’s great at music and theater. She doesn’t have to try really hard… and so sports are this place where she does have to work hard.

“She learns a lot from not being the best, and from really having to commit to getting better at something.”

As the campaign notes in the spot, dozens of bills targeting trans people have been proposed in at least 30 of the 50 states in the entire country since January, starting with 31 in the first six weeks of the year proposed in 20 states.

Since then, it’s become increasingly hard for advocates to keep track of all the proposed bills progressing through state legislatures. Just last week, anti-LGBTQ bills were passed and sent to a governor’s desk in five different states.

Despite the agenda, a majority of Americans — including Republicans — have been found not to support anti-trans legislation, especially regarding sports, according to a new NPR/PBS NewsHour/Marist poll.

Only 29 percent of Republicans said they “support a bill that prohibits transgender student athletes from joining sports teams that match their gender identity. Averaged across all political affiliations, the bills mandating genital examinations or excluding the girls altogether only garner 28 percent support. 67 percent oppose the measures.