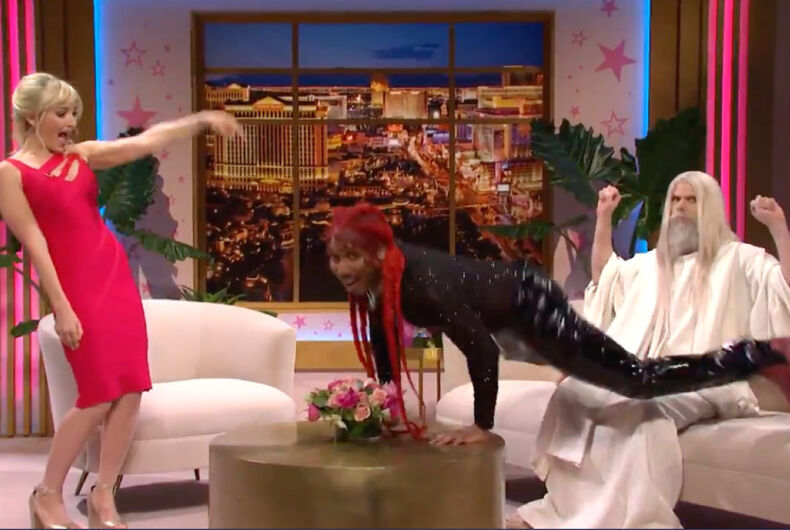 The talk show “Oops…You Did It Again” returned to Saturday Night Live this week for the cold open, once again hosted by Britney Spears (played by Chloe Fineman) to allow her to judge if they’re “innocent or not-so-innocent.”

This week’s guests on the “show” were the “social pariahs of the week,” Lil Nas X (played by Chris Redd), Pepe Le Pew (played by Kate McKinnon), and Matt Gaetz (played by Pete Davidson).

The last rendition of the sketch featured Gina Carano, Ted Cruz, and Andrew Cuomo offering “apologies” for their respective scandal.

This episode was sponsored by another “pariah,” the state of Georgia — voted “best place not to vote” over their recent voter suppression law.

Spears had out musician Lil Nas X on first to discuss the controversy over his song and music video, “Montero (Call Me By Your Name)” and his subsequent modified “Satan shoes.” Spears noted that it led to him being “attacked by the rare combo of the Catholic Church and Nike.” Nike filed a lawsuit to stop the sale of the shoes as they are modified versions of Nike sneakers.

Evaluating the controversy, he called them “closed-minded idiots.” Nas — in the same outfit he wore in the music video, deemed his “casual look” — claimed that this is all due to people who “are afraid of me because I’m different.”

“Really, I’m just your typical gay black country rap sneaker entrepreneur. I put my pants on just like everyone else: One ass-less chap at a time,” he said.

In regards to the music video, he said to people outraged, “you know that wasn’t the real Satan, right? It was a dude in a Halloween devil costume, because the real Satan doesn’t do, like, music videos? So maybe, chill?”

Afterwards, Spears suggested, “would you be willing to give a lap dance to God? Just to even things out.”

Nas shrugged, “hmm… yeah, I guess,” and so he brings out someone dressed as God (played by Mikey Day) and performs a lap dance.

“That was not the real God, that was just my friend Gary,” he said after.

The real Lil Nas X tweeted about the sketch, writing that “snl going to hell.”

Then Spears brought out out Pepe Le Pew, the infamous skunk character from Looney Tunes who is not being included in the remake of the film Space Jam.

Ascribed as the latest “cancelled” victim, Le Pew said to Spears, “I would kiss you all the way up the arm, but I realize, that’s no longer socially acceptable.” Instead, he shakes her hand.

Le Pew claimed that his part in the film was supposed to be making love to a basketball for 10 to 15 minutes before LeBron James tapped him on the shoulder. “I would love to be at a point in my career where I could turn down projects, but there’s not a lot of parts for an old French skunk,” he whined.

Le Pew claimed that the more problematic Looney Tunes characters were Speedy Gonzales and Yosemite Sam, the latter of whom “the FBI is 99 percent sure… was at the Capitol riots.”

Then came Gaetz, who would have been known as a “hot mess” in the 90s according to Spears, but is instead now a “sex pest.”

The real Gaetz is amidst yet another scandal that has him under investigation for allegedly paying women for sex, including a 17-year-old girl, which is “incredibly Florida,” according to Spears.

Gaetz claimed that he’s only under attack because he supported Donald Trump. Asked what Trump has said in his defense, Gaetz said, “giggity-squat.”

Gaetz then compared himself to Le Pew, who waves him off. “Dude, no. I’m a cartoon skunk, you’re a United States Congressman. Do better,” Le Pew shoots back.

Gaetz then offered to do a lap dance, and Nas said in response, “if you come anywhere near me, just remember I have hip-hop friends and country friends — two populations that are guaranteed to own guns.”

Delivering her “verdict,” Spears declared Nas to be innocent and Le Pew to be “not-that-innocent.” She then states that she can’t legally declare Gaetz innocent or guilty, but instead encourages others to judge him “by his face.”

Is Jerry Falwell Jr. setting the stage to return to leading Liberty University?