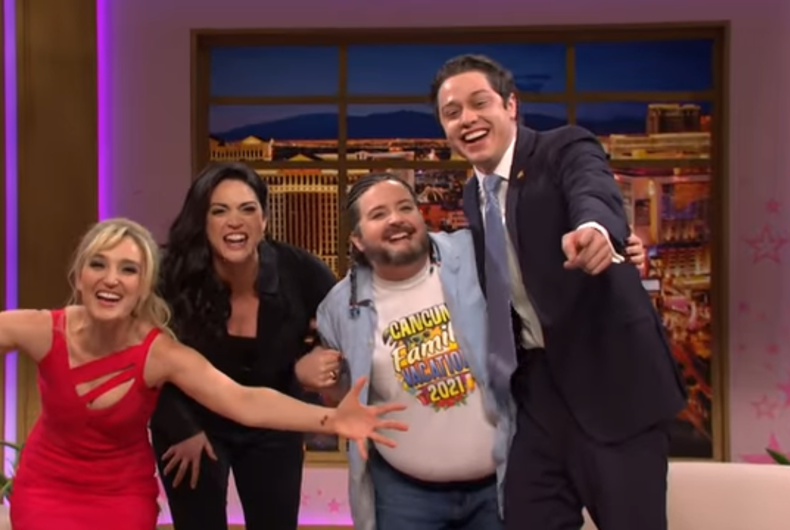 On this week’s Saturday Night Live cold open, the show’s writers once again found a way to summarize an entire week of unrelated political and pop culture happenings in one sketch.

The sketch is a segment from a new show hosted by Britney Spears (played by Chloe Fineman) — “you know me from my upbeat Instagram videos and the word ‘conservatorship’,” — live from Las Vegas.

The show is called “Oops…You Did It Again” to allow “people could come on and apologize for things they’ve done wrong.”

Because, as Spears explains, “after the #FreeBritney documentary came out, I’m receiving hundreds of apologies a day,” including the likes of Perez Hilton to Justin Timberlake.

It’s sponsored by Apple’s “Notes” App, for everyone else “looking to post a lame apology 20 years too late.”

Spears’ first guest is Ted Cruz (played by Aidy Bryant), still drinking a piña colada and wearing a beach outfit from his quickie trip to Cancun.

“Oh, I’m not tan,” Cruz explains, “I just cried myself red over my fellow Texans. And that’s why… I drink in their honor.”

While he apologizes for being “in a little bit of hot water, which I’m told is a thing no one in Texas has,” he admits that he’s “pretty bad at human stuff.”

He still puts the blame on his girls for wanting the trip, to which Spears replied, “maybe leave your daughters out of it, ’cause it could really mess up with their heads,” referencing the treatment she received from the media at a young age that characterized the New York Times-produced documentary on the star.

Next up is Andrew Cuomo (played by Pete Davidson), who “apologizes” for the nursing home cover-up scandal currently plaguing the Governor of New York.

“Some of the people who died in the nursing homes were not counted as nursing home deaths, they were counted as hospital deaths, which is basically what happens at Disney World,” he tries to explain. Just as in real life, the justification doesn’t fly on Britney’s show.

““What did that bird bitch say about me? I will bury him in the tallest grave this city has ever seen,” referencing de Blasio’s height. “I will hire a hobo to Rick Moranis him so hard he’ll think he’s back in universal pre-K,” suggesting he’ll get attacked on the street like the actor was in NYC this fall.

Speaking of Disney, the last guest is Gina Carano (played by Cecily Strong), the fired star of the Disney Plus “Star Wars” series The Mandalorian.

“I never would have made that Nazi comparison if I’d known everybody was going to be such a Nazi about it,” she claims.

In the end, even no one in this fictional universe wants to be associated with Ted Cruz.

Was Donald Trump suffering from dementia in the White House?