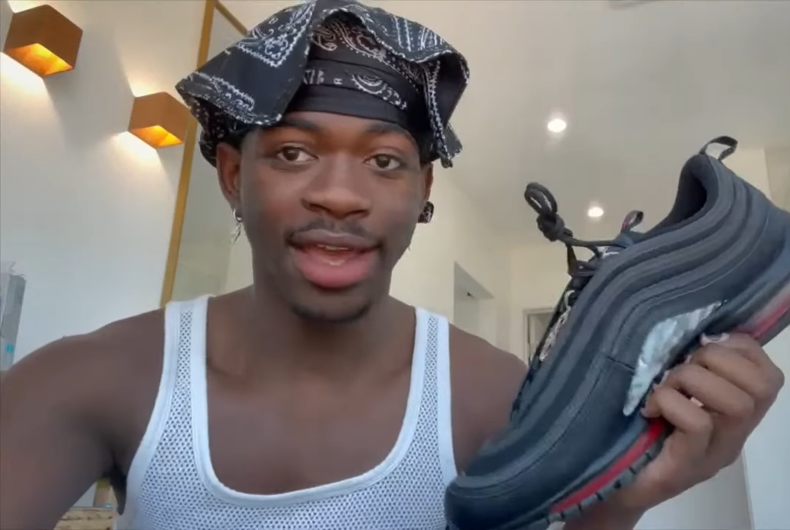 Nike filed a federal lawsuit to get a judge to order a “permanently stop” to stop the sale of Lil Nas X’s “unauthorized” Satan shoes.

Just after the release of his single “Montero (Call Me By Your Name),” Nas partnered with the boutique MSCHF to sell the shoes, which have a pentagram, an inverted cross, and allegedly contain human blood. The shoes cost $1018 (a Bible reference) and they are selling 666 of them.

This led to an outcry on the internet from Christian conservatives who accused the out star of promoting Satanism. Even South Dakota Gov. Kristi Noem (R) said that Nas was putting children’s “God-given eternal soul” at risk with the shoes.

The shoes themselves are Nike Air Max 97 sneakers that MSCHF bought and then modified, reselling them at a markup. And they still show Nike’s trademark swoosh, even though Nike was not involved in their production and issued statements yesterday to the media to distance themselves from the shoes.

So now Nike is suing MSCHF (but not Lil Nas X himself), saying that they “are likely to cause confusion and dilution and create an erroneous association between MSCHF’s products and Nike…. In the short time since the announcement of the Satan Shoes, Nike has suffered significant harm to its goodwill, including among consumers who believe that Nike is endorsing satanism.”

There are several reasons a company can sue for trademark infringement and one of them is that they don’t want to be associated with what someone else is doing with their trademark.

And in their complaint, Nike points to “calls to boycott Nike in response to the launch of MSCHF’s Satan Shoes, based on the mistaken belief that Nike has authorized or approved this product.”

Buying sneakers, decorating them, and re-selling them is a thing that already happens that companies like Nike are aware of, and the “first sale doctrine” can protect artists who buy a name-brand product and use it as their canvass. But trademark attorney Josh Gerben told CNN that the law might not protect MSCHF here because they produced hundreds of the shoes.

“It’s not just a single piece of art that some artist took a shoe and made. It’s that someone took a whole bunch of Nike shoes, customized them the exact same way and is selling them to a point in such sophisticated fashion that people think Nike’s involved,” he said.

The video for “Montero” uses Christian imagery, including a scene where Nas is wearing only underwear and boots and gives the devil a lap dance.

On Twitter, he said that the references to Satan are about how LGBTQ kids get told in church that they’re going to Hell.

“i spent my entire teenage years hating myself because of the shit y’all preached would happen to me because i was gay. so i hope u are mad, stay mad, feel the same anger you teach us to have towards ourselves,” he tweeted.

i spent my entire teenage years hating myself because of the shit y’all preached would happen to me because i was gay. so i hope u are mad, stay mad, feel the same anger you teach us to have towards ourselves.

The fact that conservative Christians have gotten upset by this implies that they believe that Satan is a literal being and that speaking positively about the devil empowers it.

The amount of American adults who in 2021 still think there's a real, literal red man with horns living in the ground, trying to tempt their children with pop culture is full-body cringeworthy.

A Black trans woman won a $50k discrimination lawsuit. She hasn’t heard anything since.