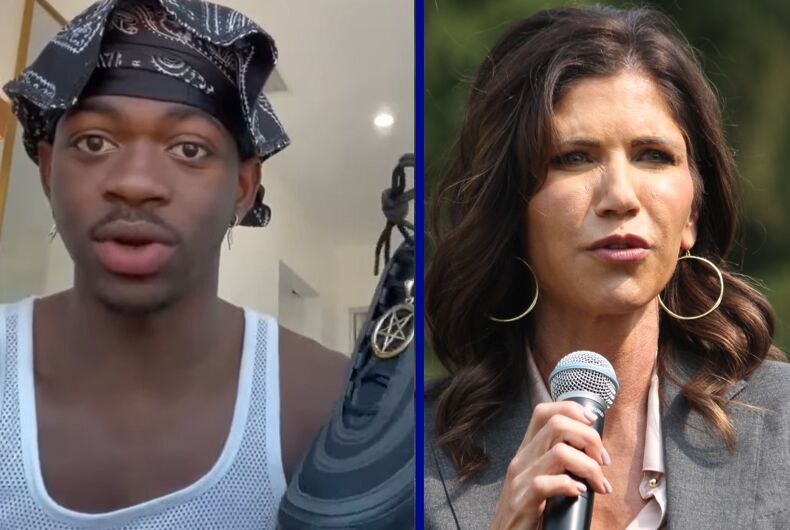 The backlash against Lil Nas X’s recently released music video is reaching a fever pitch as the governor of South Dakota publicly denounced him for selling “Satan shoes.”

“We are in a fight for the soul of our nation. We need to fight hard. And we need to fight smart. We have to win,” South Dakota Gov. Kristi Noem (R) tweeted.

Last week, Nas released a video for his new single “Montero (Call Me By Your Name)” that used gay and religious imagery, including a scene where he wears underwear and stiletto boots and gives the devil a lap dance.

The company MSCHF partnered with him to release “Satan shoes,” which they claim contain a drop of human blood. They also have a pentagram and an inverted cross, symbols associated with Satanism. They are only selling 666 of them and they cost over $1000.

Gov. Noem is outraged by the shoes that almost no one will ever wear.

“Our kids are being told that this kind of product is, not only okay, it’s ‘exclusive,'” she tweeted. “But do you know what’s more exclusive? Their God-given eternal soul.”

Our kids are being told that this kind of product is, not only okay, it's "exclusive." But do you know what's more exclusive? Their God-given eternal soul.

“ur a whole governor and u on here tweeting about some damn shoes,” Nas responded.

When Noem responded to that with a Bible quote, Nas quoted lyrics from “Montero.”

Noem has come under fire from the right in recent weeks for not signing a bill to ban transgender girls and women from school sports. She doesn’t oppose the bill – she even said that she was “excited” to sign it – she just wanted “style and form changes” to keep college athletics competitions from boycotting the state.

She was blasted on Fox News for not immediately signing the anti-trans bill and accused of “caving” to the NCAA, which governs college athletics.

A spokesperson for Noem shot back that she is the only governor who didn’t order even a partial shutdown to stop the spread of the coronavirus.

“Governor Noem is very used to fighting off criticism from the left,” the spokesperson said. “After all, in the past year, she was the only governor in the entire nation to never order a single business or church in her state to close. The left bullied her incessantly, but she didn’t cave.”

According to data from Johns Hopkins University, South Dakota has the second-highest COVID rate for its population in the U.S., just trailing North Dakota.

While the Satan shoes are Nike sneakers, Nike isn’t involved in their production. MSCHF is buying the shoes, modifying them, and then re-selling them.

Nas tweeted a Chick-fil-a shoe “to even the score.”

we have decided to drop these to even the score. damn y’all happy now? pic.twitter.com/RGpCiiRbGb