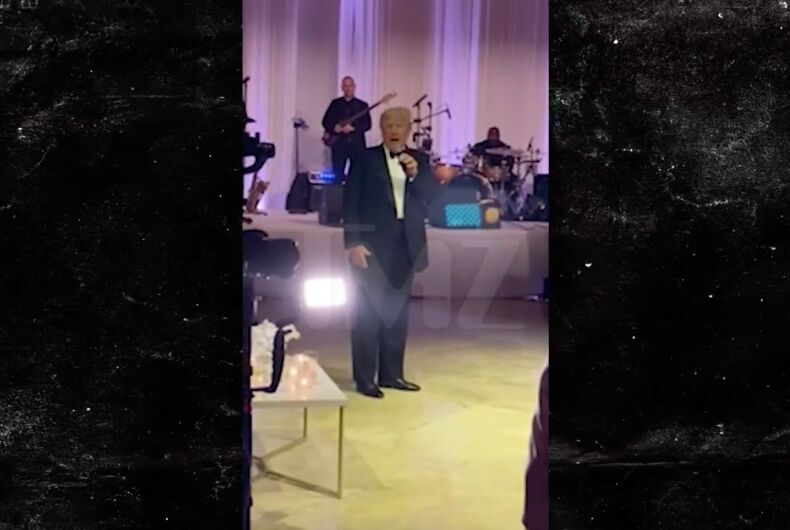 Former President Donald Trump crashed a straight couple’s wedding reception and instead of toasting the happy couple, Trump quickly pivoted to talk about his favorite topic: his own personal grievances.

Trump harangued the guests with a rant about President Joe Biden’s administration that was preposterously false.

John and Megan Arrigo’s reception turned political after the disgraced former president arrived. Trump ranted about Iran, China, and immigration before turning to his favorite subject: himself.

But at the end of his personal pity party, he finally remembered why he was there.

“So it’s a rough thing, and I just say, ‘Do you miss me yet?’” he told the crowd, repeating his untrue claims of voter fraud. “We did get 75 million votes, nobody’s ever gotten that. They said, ‘Get 66 million votes, sir, and the election’s over.’ We got 75 million and they said… but you know, you saw what happened, 10:30 in the evening, all of a sudden I said, ‘That’s a strange thing, why are they closing up certain places, right?’ Now, a lot of things happening right now, I just wanted to say, it’s an honor to be here, it’s an honor to have you at Mar-a-Lago, you are a great and beautiful couple.”

When you purchase the wedding package at Mar a Lago they throw in the 5 minute stand up set by Donald Trump for free.