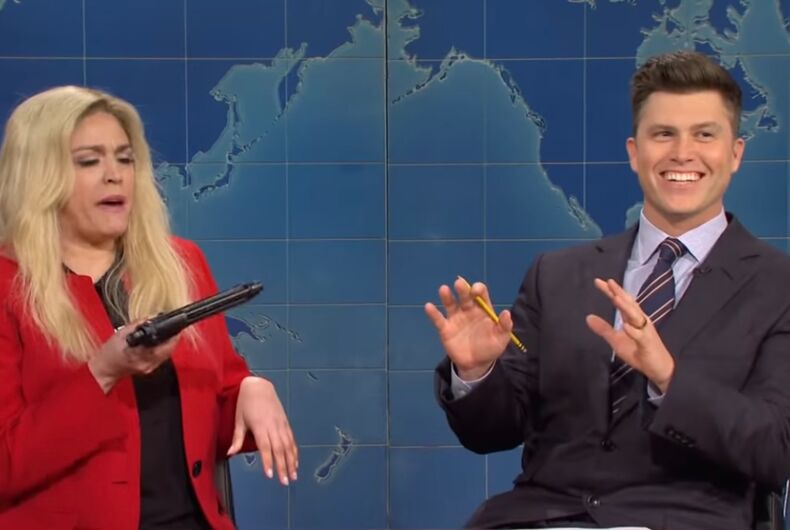 After a week of failed, pointless anti-LGBTQ rhetoric in opposition to landmark LGBTQ legislation, Rep. Marjorie Taylor Greene (R-GA) received due recognition that she rightfully earned: being lampooned on Saturday Night Live.

Rep. Greene, played by cast member Cecily Strong, appeared on the “Weekend Update” segment hosted by Colin Jost and Michael Che to explain why she put up a sign claiming that there’s only “TWO” genders outside her office.

The segment stems from a stand off the real-life Greene has been having with the legislator across from her, Rep. Marie Newman (D-IL). Newman, a first-term Congresswoman who has a trans daughter, put up a transgender flag across the hall from Greene’s office so that she’d have to see it every day.

Greene – best known for her support for bizarre conspiracy theories – is also really opposed to LGBTQ rights. So in response, she put up a hateful sign that said: “There are TWO genders: MALE & FEMALE. ‘Trust The Science!’”

This week, she called the Equality Act “DISGUSTING, IMMORAL, AND EVIL” in Twitter rants and even tried to shut down Congress just to prevent debate on the landmark LGBTQ civil rights bill, forcing everyone to vote to keep it open.

Greene’s measure failed 202-214. Every single Republican representative voted with her.

On “Weekend Update”, the faux Greene tried to discuss why she thought her actions were necessary, in between pulling out a gun and insanely-dramatic sneezes (which she explains are due to a “demon” that got into her when she was younger because no one said, “bless you.”)

“They are calling me Congress’ new ‘It’ girl,” Greene bragged. Not an ‘it girl’ as in a popular person, but “It, like the evil clown the preys on children.”

“I just love the si-ence!” she proclaimed, before revealing a shirt with the misspelling of “science.”

“You know me, I’m a science person. I love science,” she continued. “I’m always talking science, OK? Unless that science is about climate change, coronavirus, space lasers, evolution, the metric system, the rhythm method, breastfeeding, living on Mars, Jesus’ skin color or Santa’s skin color — by the way, which is white…”

Greene explained to Jost that everyone is “endowed with traditional gender roles,” and that should be embraced.

For example, “I’m a woman, so it’s my job to bully, threaten and fight my female colleagues,” she says. “Scientists call these cat fights and it’s what girls do.”

Referring to Greene’s past harassing participants in Drag Queen Story Hour and survivors of mass shootings, the faux Greene defends herself by saying, “I can’t help it, I’m a fighter, OK? I have a boombastic personality. I fight the Democrats, I fight the socialists, I fight traumatized teenagers walking on the street alone. I fight my own hair every morning with a flat iron and bottle of Aqua Net.”

Greene will even fight her own fellow Republicans, including those that “scissored” her. Not “censured”, as Jost and any normal person assumed she meant, because Greene doesn’t associate with that “lesbian stuff.”

Greene even is ready to go after the “woke radical liberals” for “trying to cancel” Mr. Potato Head for being “proud of  his God-given potato penis.”

“Is that so crazy?” she repeatedly asks.