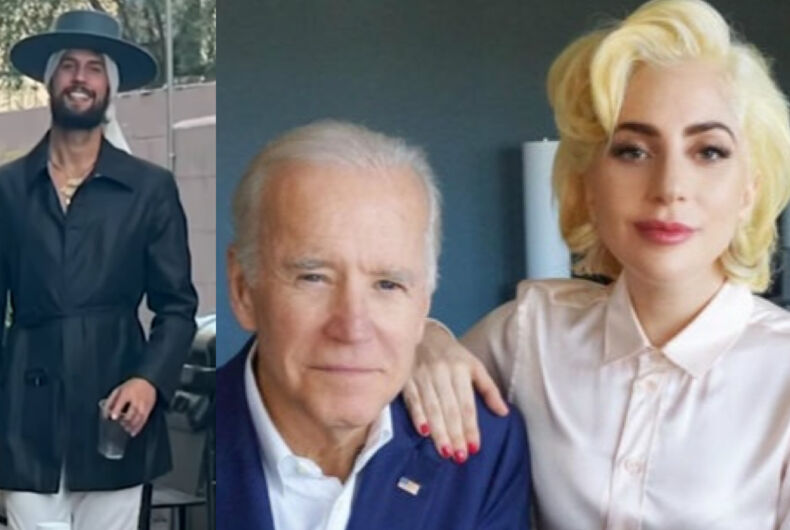 The Hollywood-esque saga leading to Lady Gaga’s dogs being stolen — and the dog’s caretakers, Ryan Fischer, shot and left for dead — has come to an end just as quickly as it started.

The bisexual entertainer is currently in Rome working on a film project, just a month after she sung the national anthem at President Joe Biden’s inauguration. Fischer was walking her three French bulldogs on February 24 in Los Angeles when a white sedan approached him.

Related: Joe Biden got inaugurated, so why is Lady Gaga trending?

Two men hopped out of the sedan, later identified as a Nissan Altima, and began physically beating Fischer. The men tried to hold him while taking the dogs, but eventually one pulled out a gun and fired, hitting Fischer in the chest. The two men drove off with two of the dogs, leaving Fischer bleeding by Sierra Bonita and Sunset Boulevards.

The entire assault, complete with Fischer screaming in fear of his life, was caught on multiple surveillance cameras. Footage made its way online and across media.

One of Gaga’s dogs escaped and Fischer was seen holding onto that dog as long as he could before emergency responders took him to the hospital. He is in stable condition and expected to make a full recovery.

Trans activist and bisexual adult film performer Buck Angel reported to the U.S. Sun tabloid that the incident took place near his residence and he was one of the individuals who called 911 immediately after. “I actually thought he was dead. He was shot once, I believe, even though there were two gun shots.”

Afterwards, Gaga publicly pledged a $500,000 reward for Koji and Gustav, the two dogs that were kidnapped, with “no questions asked” in exchange for their safe return. She also publicly honored and praised Fischer for risking his life and hoped for his recovery.

“You risked your life to fight for our family,” she said. “You’re forever a hero.”

If you bought or found them unknowingly, the reward is the same. I continue to love you Ryan Fischer, you risked your life to fight for our family. You’re forever a hero.

A woman in Los Angeles later came across the dogs and bought them to the Los Angeles Police Department (LAPD) precinct in the Pico-Union neighborhood, where their return to their owner’s custody was arranged.

The LAPD are keeping details about the woman and the dog’s return confidential, but they do not believe the woman had any connections with the kidnapping and attempted murder. They described her as “uninvolved and unassociated” with the attack, and it is believed that she had randomly came across the dogs that were left tied to a pole. Details on whether she will receive the reward were not publicly detailed by the LAPD.

FBI investigators, who have been involved in the case since the news broke, are looking into the possibility that Gaga’s pro-Biden advocacy this fall and her performance at his Inauguration last month may have led to a coordinated effort to extort her, possibly due to political motivations. The LAPD and FBI offered no official opinion either way.

It remains to be seen whether Gaga’s dogs were targeted because of their owners or the anticipated worth of dogs of that breed. Some French bulldogs are sold for tens of thousands of dollars based on their breed alone. It’s not known if a ransom demand was ever made.

Buck Angel expressed that “where the attack happened can’t just be down to chance.”

TMZ reports that Fischer had stopped by a store just blocks before he was stopped and shot, which may have bought him to the attention of the assailants. They may not have known he was walking Gaga’s dogs specifically at the time.

Manhattan doctor Fred Pescatore, who formerly employed Fischer for taking care of his dogs in New York City, told People Magazine that Fischer is an “amazing” friend and “there’s nothing negative about that man.”

“He would protect these dogs with his life. And he almost has. And let’s hope he has not,” Dr. Pescatore stated. “I just want the world to know the man behind Lady Gaga’s dogs, and other people’s dogs, and this man deserves recognition. He was the one that was shot. He was the one protecting her dogs. And not enough people are focusing on that.”

Both of Lady Gaga’s dogs have been turned in to a local police station, and they have been safely reunited with Lady Gaga representatives. https://t.co/c5Z5QMa944

The woman found the dogs and reached out to Lady Gaga’s staff to return them.  The woman’s identity and the location the dogs were found will remain confidential due to the active criminal investigation and for her safety.

The victim is listed in stable condition after the shooting, and his injuries were described as being non-life-threatening.

LAPD Robbery Homicide Detectives will continue to investigate to ensure the persons responsible are ultimately arrested and brought before justice.

The owner of the stolen dogs was identified to be the celebrity known as “Lady Gaga.”

The victim is in stable condition.

If anyone has videos/photos of this incident email SAFELATIPS@lapd.online