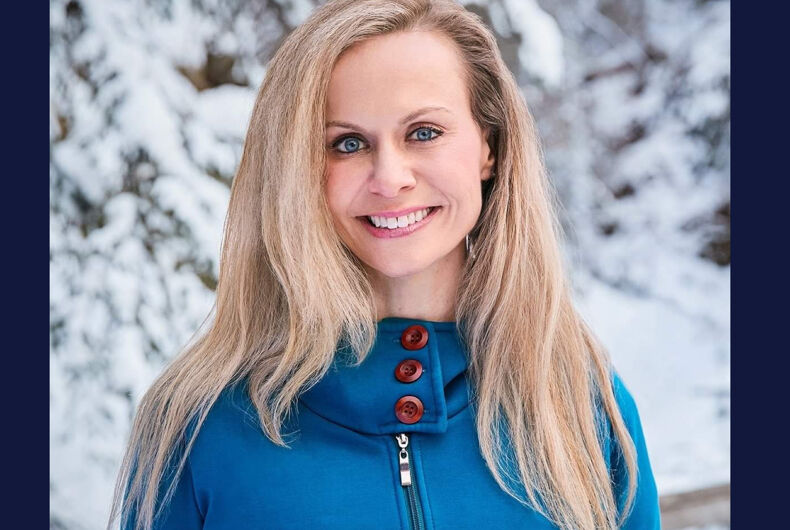 The Alaska Republican party voted to censure Sen. Lisa Murkowsi this winter because she was the few Republican senators to vote in favor of impeaching former President Donald Trump. The Party also stated that it would openly recruit a candidate to primary her.

While reviewing online activity scrubbed from the internet regarding her falsified claims that the 2020 Presidential election was “rigged,” CNN‘s Em Steck and Andrew Kaczynski unearthed an article she wrote under her maiden name headlined “The Right Side: Coming out of Homosexuality.”

“Today is National Coming Out of Homosexuality Day, a day dedicated to helping homosexuals overcome their sexual tendencies and move towards a healthy lifestyle,” she proclaimed. “Compassionate people nationwide recognize this day, rather than the more publicized ‘National Coming Out Day,’ because they want people to live and enjoy their lives to the fullest.”

She compelled gay people to “not be controlled by the ‘once-gay-always-gay-rhetoric’ used to advance political agendas.” She further falsely claimed that “the most common cause of homosexuality is sexual molestation during childhood.”

Instead, she wanted them to get in contact with Exodus International, a prominent “ex-gay” organization that disbanded in 2013. Its leaders renounced their own practices in 2012, and people that led the organization have since come out and identified as members of the LGBTQ community.

The former leaders have admitted the practice didn’t work and was harmful to people.

Tshibaka was condemned by some on campus for the article and issued a response later, saying that she “appreciated” responses that were “clever” and “thought-provoking.” But as for people her article harmed, she wrote, “I did not intend to offend you, but simply discuss an alternative perspective.”

Alternatively, she wrote around 2002 that “some would say I was born conservative — it’s not a choice.”

Tshibaka served as the Alaska Commissioner of Administration from 2019 until she resigned this year to run for the Senate. During confirmation hearings for the commissioner seat, she was asked about her views that homosexuality is a sin, and she condemned the legislator that asked the question, claiming the topic was an “unconstitutional line of inquiry that violates my civil liberties.”

She penned an article that condemned the movie franchise Twilight as “evil” and suggested it was Satanic propaganda because it “is a perfect example of how the enemy twists, perverts, and ridicules the things of God.” She also suggested pharmaceutical drugs were products of witchcraft practices and said “there is a link between drugs and witchcraft.”

So far, Tshibaka is the only declared candidate running for Murkowski’s seat, which comes up on the ballot in 2022. Murkowski has won three consecutive elections since being appointed to her father’s former seat in 2002 by her father, when he became the governor of Alaska.

Murkowski has often gone against the party line, and at times supported pro-LGBTQ measures. She often stood against Trump, such as denouncing his ban on trans servicemembers in the military even before voting to impeach him in January, and opposing an attempt to ban trans girls and women from sports. She has voted in favor of the position endorsed by the Human Rights Campaign on four different resolutions this year, but she still holds a rating of three from the Campaign’s Congressional scorecard based on votes in prior sessions of Congress.

Murkowski has historically done well in elections, even when challenged in primaries. She lost the 2010 primary to a Tea Party candidate, then she ran as a write-in candidate and beat both him and her other Democratic opponent in the general election.