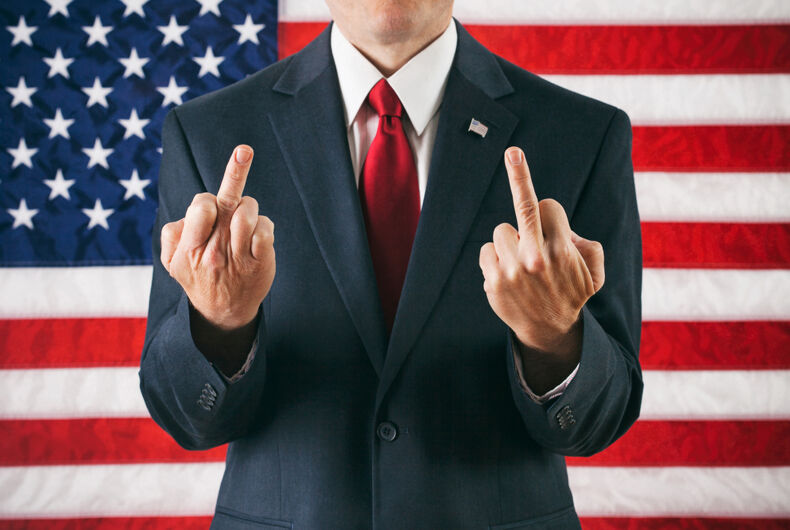 Republicans aren’t known for being staunch supporters of LGBT rights, but Donald Trump’s unilateral decision to ban transgender people from the military has many GOP politicians publicly disagreeing with their president. Here’s a quick list of Republicans who’ve expressed their outrage and support for trans service members.

Senator John McCain (D-AZ). “The statement was unclear. The Department of Defense has already decided to allow currently-serving transgender individuals to stay in the military, and many are serving honorably today. Any American who meets current medical and readiness standards should be allowed to continue serving. There is no reason to force servicemembers who are able to fight, train and deploy to leave the military — regardless of their gender identity. We should all be guided by the principle that any American who wants to serve our country and is able to meet the standards should have the opportunity to do so — and should be treated as the patriots they are.”

Senator Joni Ernst (R-IA). “Americans who are qualified and can meet the standards to serve in the military should be afforded that opportunity.”

Senator Orrin Hatch (R-UT). 1) “I don’t think we should be discriminating against anyone. Transgender people are people, and deserve the best we can do for them. I look forward to getting much more information and clarity for our military leaders about the policy the President tweeted today.” 2) “They don’t choose to be transgender, they’re born that way. Why should we hold that against them? They’re human beings and many of them are extremely talented human beings. We should be open to everybody”

Senator Thom Tillis (R-NC). “I would have significant objections to any proposal that calls for a specific group of American patriots currently serving in uniform to be removed from the military.”

Senator Dan Sullivan (R-AK). “I’m all about training standards. High, high standards for whoever joins the military. But my initial reaction is, if you can meet those standards, we shouldn’t care who you are. So, meet the standards, and you should be able to join the military.”

Senator Richard Shelby (R-AL). “We are a nation at war. I am confident that Secretary Mattis and DoD leadership can and will evaluate current personnel policy that will enable us to recruit, train, and equip an all-volunteer force. Any American who wants to serve our country and is able to meet those standards should have the opportunity to do so.”

Senator Susan Collins (R-ME). “Our armed forces should welcome the service of any qualified individual who is willing and capable of serving our country.”

Senator Patrick Toomey (R-PA). “Department of Defense personnel decisions should be based entirely on maximizing the Armed Forces’ ability to protect and defend the American people,” Toomey spokesman Steve Kelly said, adding that the senator “has supported measures to protect individuals from discrimination based on their sexual orientation or gender identity.”

Senator Lisa Murkowski (R-AK). “I was one who said that those who are openly gay should not be denied the opportunity to serve our country and I feel the same way about transgender.”

Senator Ron Johnson (R-WI). “I think any law-abiding American who wants to serve the nation should be able to.”

Senator Rob Portman (R-OH). “We should not turn anyone away who is willing and able to serve our country, period,” he said. “The president’s wrong.”

Congressman Charlie Dent (R-PA). “Americans who are willing & able should be allowed to serve U.S. regardless of race, religion, gender, sexual orientation or gender identity”

Congresswoman Ileana Ros-Lehtinen (R-FL). “No American, no matter their sexual orientation or gender identity, should be prohibited from honor + privilege of serving our nation #LGBT”

Congressman Frank Lobiondo (R-NJ). “Removing thousands of men and women from admirably and honorably serving is counterintuitive to strengthening our military. I have serious concerns about what this new directive means for current active duty and reserve transgender members of our Armed Forces and National Guard. I expect Defense Secretary Mattis to provide clarity on this issue and determine what is in the best interest of military readiness to protect our nation.”

Congressman Ken Buck (R-CO). “America needs a military comprised of patriots willing to sacrifice for this country. Any American who is physically and emotionally qualified should be allowed to serve.”

Congressman Scott Taylor (R-VA). “ There are heroic military members willing to put their lives on the line and give the ultimate sacrifice on our behalf, regardless of their gender identity. I support the ability for those who meet all military requirements, medical and otherwise, to have the opportunity to serve our great country.”

With trans troop ban, Trump cements his place in history as Bigot-In-Chief