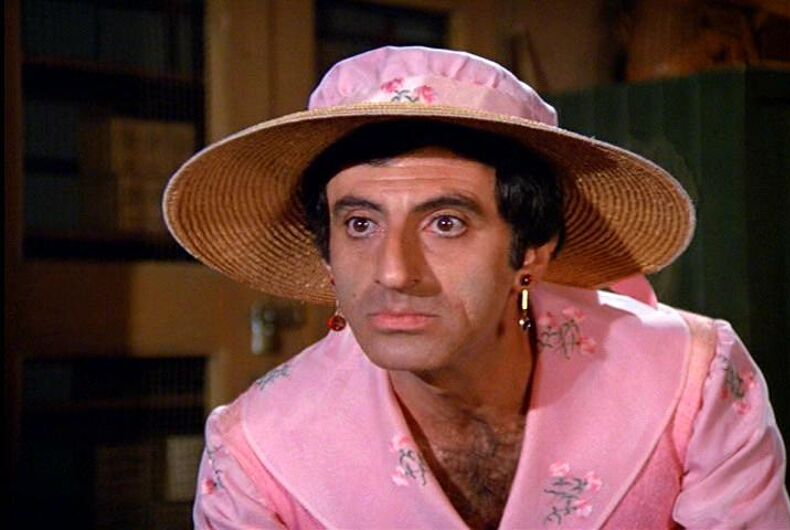 So, because this has come up a couple times, let’s talk about Corporal Maxwell Q. Klinger…

As the character was initially written, his “point” was that he did not want to be in the army, and was pulling stunts to get a second 8 discharge. A Section 8 discharge, which is no longer in use as such, was for soldiers deemed mentally unfit for duty.

Of course, Klinger’s plans always fall through, and his COs see right through his ploys. Eventually it was dropped as the character evolved. The long-running cross-dressing is played as a joke, with Klinger usually the butt of same.

Oh, as you could probably guess: I grew up on M*A*S*H. That was must-see TV at home. I’ve likely seen every episode 4 times.

Now Klinger has come up on *both sides* of discussions about trans military. Let’s talk about those using it on a pro trans side. The others don’t matter.

For some, Klinger is seen as a subversive character, and that’s fine. Certainly he was “getting away” with cross-gender presentation.

For others, Klinger was one of the few glimmers of trans anything on TV in the 1970s. Right up there with Jodie Dallas or Linda Murkland. Klinger got to do such every week on TV, and those around him, while joking, nevertheless did not beat him for wearing dresses …and well, that was fairly progressive, I suppose.

Yet when we talk about trans folks in the military, I really don’t think Corporal Klinger is your best option. Beloved character or not.

Maybe it’s a bit “Milkshake Duck” here, but if you are comparing Klinger to trans people, you may be implying either subterfuge or insanity. You are equating trans people with being “men in dresses” who are trying to be deceptive and have a mental disorder.

Which, I gotta tell you, we get that a lot. A whole lot. So much that, ya, there were some raw feelings on a very raw feelings day.

Now I know folks meant well. There wasn’t ill intent here (I mean, from our allies), but we know what the road to hell is paved with – please understand why some may have taken that very poorly. Me, I’m thick skinned, but others aren’t so much.

There’s a whole lot more I’d like to talk about. How the military is often one of the few options for employment for trans people. …and how much that sucks for them and so many other minorities. And how the DOJ’s moves only make it all worse.

I don’t want to be out there defending the military, but yet here I am having to fight for trans people to be able to go kill. …and how this is just the start of a whole lot of fuckery that’s coming, no doubt, and they’re going to do their level best to erase us.

…but right now, truth be told, those are a whole lot rawer to me that talking about Corporal Klinger. The rest of it sends me into a rage.

I just got my hand out of a cast, and the bone is yet fragile. I can’t be punching any more walls just yet, see. Trying to swear off.

So let’s elevate the real trans troops out there, and maybe not Corporal Maxwell Q. Klinger while this issue is an issue, shall we?