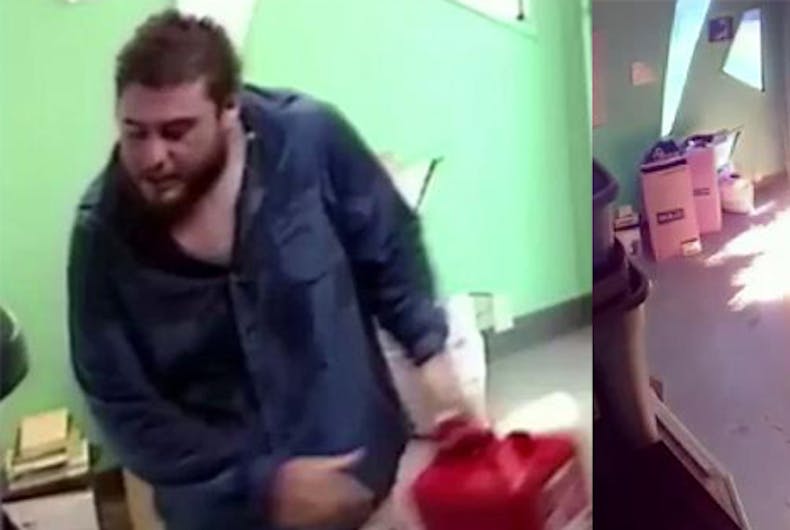 Police are looking for the man at left for setting an LGBT youth center on fire.Photo: Phoenix Fire Department

Police are searching for a man caught on camera torching an LGBT youth center in Phoenix, Arizona.

The one•n•ten Youth Center was set ablaze at around 11 a.m. on July 12. Police are looking for 26-year-old Darren William Beach, Jr., the man suspected of appearing on video, emptying gasoline in a room before it goes up in flames, the local Fox News affiliate reports.

According to the center, the man is a former client of the center’s.

Fortunately, no one was hurt in the fire. And while many items were destroyed, the group already planned to open a new center before the fire. They expect to be completed with the new facility by early September.

The community has also come through with support during this difficult time.

“It’s just been an incredible response from the community,” One.n.ten Executive Director Linda Elliot told AZcentral. “From the next day until today, people have just been streaming in here, making donations, bringing supplies, buying things.”

She did add, however, that knowing the fire was due to arson, and not “spontaneous combustion” as investigators first thought, was “a lot more traumatizing.”

Anyone with information is asked to leave an anonymous tip with Silent Witness by calling 480-WITNESS (480-948-6377).

Is Trump about to release that anticipated anti-LGBT ‘religious freedom’ order?