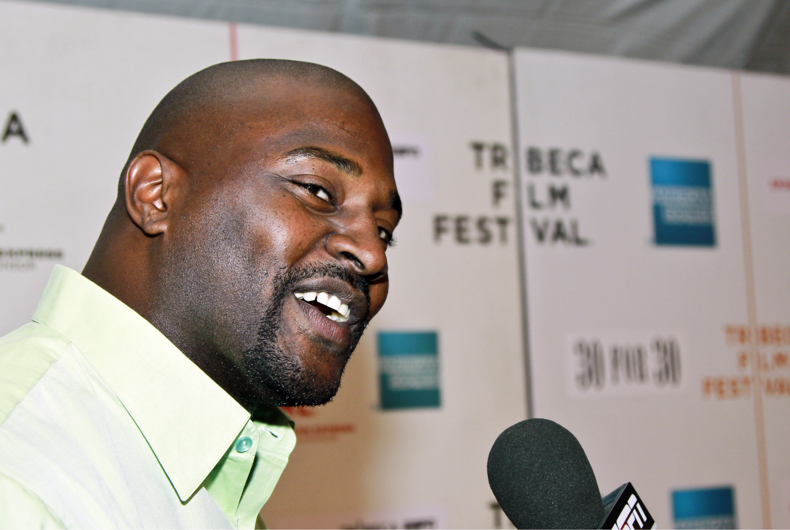 Marcellus Wiley, an ex-NFL athlete and current host on the FOX Sports 1 channel, believes that “it’s time to create a separate transgender category” for trans people that wish to play athletics.

“As a father of 3 daughters & the husband to a former collegiate athlete, this hits home in a special way,” he wrote. “It’s time to create a separate transgender category in competition!

“Also think it’s time for me to start a podcast bcuz some things need to be discussed in detail,” he concluded in a post to Twitter last week.

The post featured screenshots of Instagram posts and Google searches, that are in turn screenshots of a story about a federal lawsuit, a Wall Street Journal opinion editorial that claims Joe Biden “began the end of Girls’ sports,” and a tweet deadnaming and promoting transphobic tropes about trans athlete CeCe Telfar. Telfar won the national title for the 400-meter hurdles at NCAA Division II Outdoor Track and Field Championships women’s category in 2019.

“Is that respecting all?” Wiley responded, while noting he “hears” the “pushback” to his suggestion.

As a father of 3 daughters & the husband to a former collegiate athlete, this hits home in a special way🤯It’s time to create a separate transgender category in competition!
Also think it’s time for me to start a podcast bcuz some things need to be discussed in detail!💯#respect pic.twitter.com/FFhmZutmmP

🤔 I’m hearing that pushback. But, is that respecting all? That’s what I want to dive into

Wiley made the post after President Joe Biden issued an executive order to solidify protections for LGBTQ people against discrimination. The order simply tells the heads of all executive agencies to “review all existing orders, regulations, guidance documents, policies, programs, or other agency actions” in order to ensure that they are interpreting bans on sex discrimination in federal law to also ban discrimination “prohibit discrimination on the basis of gender identity or sexual orientation.”

Biden’s executive order implements what the Supreme Court already deemed the law of the land with their 2020 Bostock v. Clayton Co. decision on job discrimination, across all sectors of the federal government. In Bostock, the majority of the court found that the ban on job discrimination “because of sex” in Title VII of the Civil Rights Act of 1964 also bans discrimination against LGBTQ people, since anti-LGBTQ discrimination is inherently based on sex.

Biden’s order extends the same reasoning the Supreme Court made regarding job discrimination and applies it to other federal anti-discrimination laws, like Title IX of the Education Amendments of 1972, the Fair Housing Act, and section 412 of the Immigration and Nationality Act.

Unsurprisingly, Wiley’s suggestion was not enough for online transphobes and TERFs, who would prefer zero acknowledgement of trans people in sports or anywhere else.

“Honestly, if you think this is okay then idk man but you need help as well,” said one tweet quoting Wiley.

Out of the hundreds of responses, some of the less derogatory reactions included people repeating unproven tropes such as “transgender women athletes have a clear unfair advantage,” or citing supposed studies that just happen to reinforce sexist notions such as “boys can run faster, jump and throw further, and score higher on measurements of strength” than girls, thus suggesting that trans girls have an advantage.

“It is unfair for a penis to compete against a vagina,” one person proclaimed. “A Y chromosome gives an insane athletic advantage,” another claimed.

Still, some responses offered to explain to Wiley what was wrong with his and others’ misconceptions about trans people and trans athletes.

You’re perpetuating some common myths about Trans Athletes. What you’re sharing isn’t supported by science, and we know that sports are something that should bring people together, not used to isolate.

Happy to have a thoughtful, respectful conversation about this. I've learned so much in my 20 years of writing about trans athletes. Happy to listen, and also share what I've learned.