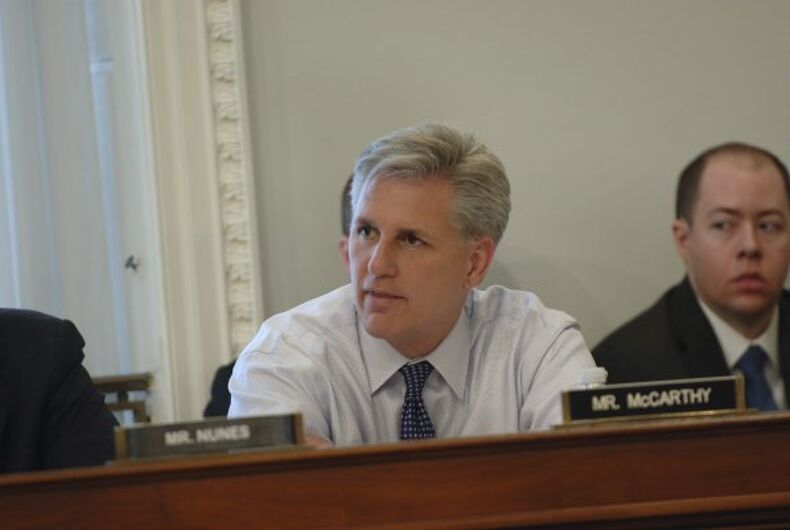 House Republican leader Kevin McCarthy has to be the most feckless politician since James Buchanan.

Tthe presumably gay Buchanan, when he was president, dithered while the country became increasingly divided over the issue of slavery. In a vain attempt to paper over the profound differences between North and South, Buchanan intervened in the notorious Dred Scott case, ensuring that slavery remained the law of the land. All Buchanan did was deepen divisions.

Even when seven states seceded in the final months of his presidency, Buchanan refused to act, saying he didn’t have the authority to do so.

McCarthy is following Buchanan’s playbook. Faced with a deeply divided Republican party, he is pretending that the divisions don’t exist.

Last week, McCarthy refused to discipline newly elected Rep. Marjorie Taylor Greene, even though Greene is a conspiracy-minded extremist who had previously called for Pelosi and other Democrats to be executed for treason.

At the same time, McCarthy stood by Rep. Liz Cheney after she faced calls for removal from her leadership post because she voted for Trump’s impeachment.

Or at least McCarthy stood by her publicly. Privately, he called on her to apologize.

Faced with a party split between standard issue conservatives like Cheney, and extremists unmoored from reality like Greene, McCarthy pretended that the two sides are equal.

McCarthy has offered some criticism of Greene, only to immediately undercut his own remarks. “Past comments from and endorsed by Marjorie Taylor Greene on school shootings, political violence, and anti-Semitic conspiracy theories do not represent the values or beliefs of the House Republican Conference,” McCarthy said.

He then condemned the Democratic move to strip Greene of her committee assignments as a “power play.”

Greene herself offered a half-hearted apology reminiscent of the times when her hero Trump was forced to read prepared remarks in a voice that suggested he didn’t believe a word of what he was saying.

McCarthy declared victory, by proclaiming that “this Republican party’s a very big tent.”

The problem is that the phrase “big tent” means differences in policy positions. It doesn’t mean differences in reality. That’s the problem facing the GOP today. It’s not like members are dickering over the size of tax cuts. They’re fighting over whether Democrats stole the election and whether the insurrection was really an antifa-led false flag event.

Looming over all of this mess — indeed, the root of it — is Donald Trump. McCarthy is scared that Trump will lash out at him, threatening him with a primary challenger. To that end, the House leader went to Florida two weeks ago to meet with the former inciter-in-chief. Trump had been threatening to fund challengers for anyone who voted for impeachment or against his acolytes, like Greene.

Cheney has been a particular target of Trump’s, but unlike McCarthy and others, Cheney has principles that she is sticking to. Even though nearly a third of the House Republicans voted to oust her from her leadership role and her state party censured her, Cheney isn’t backing down.

Cheney made her comments on Fox News, hardly the friendliest venue for calling the former president a liar.

McCarthy is betting that he can hold the party together by pretending Trump is a great leader and that it’s the Democrats who are the real extremists. That denial is only going to delay the inevitable showdown between the two sides of the party.

Meanwhile, Democrats are quick to point out McCarthy’s cowardice.

“Kevin McCarthy stands for nothing except the perpetuation of his own position. He has no values, and in my view cares about little except for hoping to be speaker one day, God forbid,” Democratic Rep. Adam Schiff said.

The Republican Party can’t be both the party of reality and unreality. Perhaps the extremists will drive enough of the establishment types like Cheney out of elected office, with Trump’s blessing.

However, as last year’s election showed, that comes at a heavy price with voters. Even relying on its affinity for voter suppression, the GOP could remain a minority party for years.

Most voters aren’t fans of Q-Anon. Indeed, McCarthy himself wasn’t last August, when he condemned it.

Until last week, when he said, “I don’t even know what is is.”

That’s the kind of comment that would make James Buchanan proud.