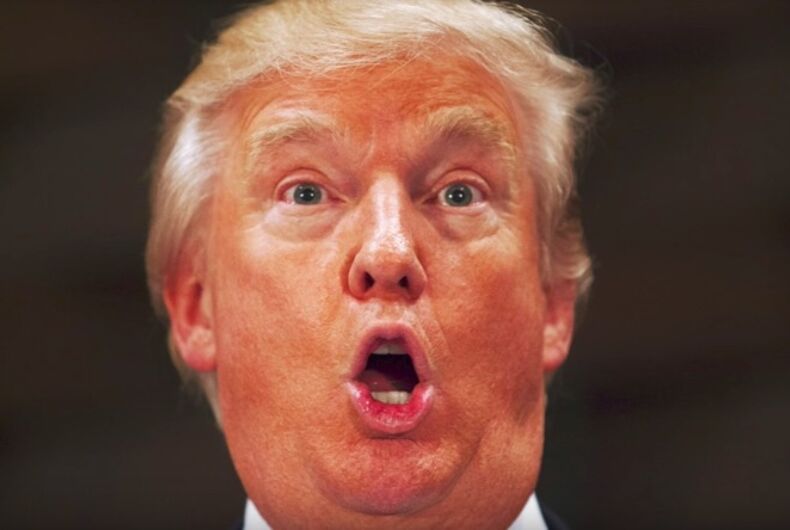 There’s good news for the fans of the nation’s first gay president. Donald Trump is worse.

James Buchanan, the basement dweller in the rankings of presidential greatness, has moved up one notch, thanks to Trump.

Trump makes his debut on the 2018 Presidents and Executive Politics Presidential Greatness Survey securely at the bottom. He scored 12.34 points, nearly three points lower than Buchanan, at 15.09.

Related: The men behind the man: Abraham Lincoln’s gay lovers

Moving up 10 places was Barack Obama, now in eighth place, up from 14th place in the 2014 ranking.

Who’s on top? None other than Abraham Lincoln, whom some researchers consider the nation’s second gay president. His relationship with his close friend, Joshua Fry Speed, prompted biographer Carl Sandberg to make reference to Lincoln’s homosexuality as early as 1926.

Lincoln served from 1861-65. Buchanan served right before him, from 1857-61, and he left Lincoln a disastrous national landscape. Buchanan’s failure to deal with slavery and, in particular, the eventual secession of the southern states, prompts his low rating among historians.

After Buchanan’s fianceé Anne Coleman broke their engagement and soon died, in 1819, he never courted another woman. He had a close, intimate relationship with Alabama politician William Rufus King. They lived together in a Washington boardinghouse for a decade, from 1834-44.

Related: Gays who love Donald Trump are planning a rally at the Lincoln Memorial

“Overall, Trump earns three Fs and two Ds, with his best score on communicating with the public, and the lowest on embodying institutional norms,” the survey report said.

“As one might expect for a Republican president, Trump did best with self-identified Republicans and those identified as either conservative or somewhat conservative. However, he did not do extremely well even with these groups.”

The 2018 Presidents and Executive Politics Presidential Greatness Survey polled social-science experts in presidential politics between Dec. 22, 2017, and Jan. 16, 2018. The survey authors are Brandon Rottinghaus, of the University of Houston, and Justin Vaughn, of Boise State University.

Before Moonlight: 10 films that celebrate the African American LGBT experience