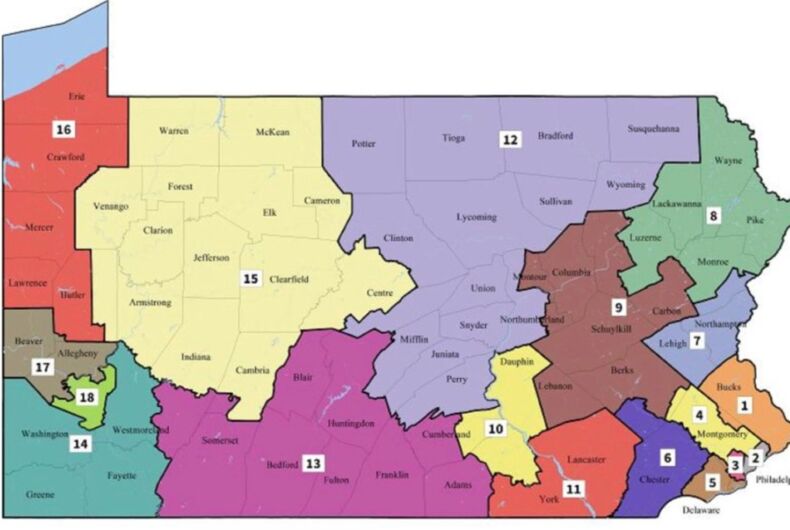 Drawing the lines for Congressional districts is one of those exercises that sounds incredibly boring and is in reality incredibly important.

Republicans have mastered the art of gerrymandering, creating mythically shaped districts that bear little resemblance to geography but that have the virtue of giving the GOP a big electoral advantage.

By packing voters inclined to go for Democrats into as few districts as possible and spreading Republican voters out over as many districts as they can, GOP lawmakers in states they control have ensured that a disproportionate number of Republicans go to Congress.

The effort is part and parcel of the party’s nationwide attempt to defy demographics by suppressing Democratic turnout by any means possible.

Unfortunately for Republicans, the jig may finally be up. To the ire of Republicans, the Pennsylvania Supreme Court struck down that state’s district map on the grounds that it was overly partisan.

And was it ever. Statewide in 2012, Democrats had a slight edge overall in the total votes in Congressional races. Barack Obama won the state handily. Yet Republicans won 13 of the state’s Congressional seats and have in every election since. No wonder the Republican map was dubbed the “gerrymander of the decade.”

After the Republican state legislature and the Democratic governor failed to arrive at a new map, the state Supreme Court drew up a new one. Barring an expected conservative wave, Democrats are bound to have more representation when Congress convenes in 2019.

Gone are the weird shapes that tried to counterbalance Democratic areas with even more Republican ones. Once safe Republican districts are now more competitive or even Democratic-leaning. Instead of trying to cram as many liberal voters–including gay ones–into as few districts as possible, the new map relies on common interests to create much greater fairness.

The upshot is that the Democrats’ chances of winning the House in this year’s midterm elections just got a lot stronger. The Democrats need to flip 24 seats to take control of the House; they are likely to pick up at least two and possibly six as a result of the new map.

Republicans are beside themselves with anger, of course. There’s a move underway to impeach the court’s judges, with a legislator who filed impeachment charges claiming the Court violated God’s sovereign power.

An effort to get the U.S. Supreme Court to intervene failed. Because the state Supreme Court’s decision was based on the state Constitution, there’s no legal reason for the federal courts to get involved. (Not that an activist judge might not try.)

Of course, the GOP could try to hold onto the seats by actually holding positions that voters would support. But why do politics the old-fashioned way when you can stack the deck?

Trans man sues Google, claiming he was fired for objecting to white supremacy