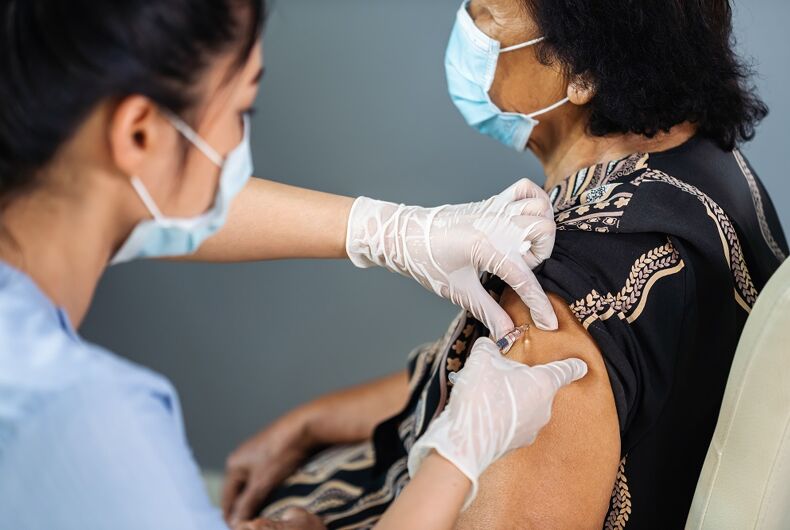 A religious leader in Iran told his followers that the COVID-19 vaccine is capable of turning people gay.

“Don’t go near those who have had the COVID vaccine,” wrote Ayatollah Abbas Tabrizian of Qom on the instant messaging platform Telegram, according to the Saudi broadsheet Arab News. “They have become homosexuals.”

Tabrizian, who has over 200,000 followers on the platform, has long been a critic of science-based medicine. Last year, he burned a copy of Harrison’s Manual of Medicine in a viral video.

“His goal of spreading nonsense is to try to scare people [out] of getting vaccinated while the leader of the regime and other officials got Pfizer and they don’t provide it for the people with the excuse that they don’t trust the West,” said Iranian dissident Sheina Vojoudi.

“Like other clerics in the regime, also Tabrizian relates all the shortages to sexuality. The clerics in Iran are suffering from lack of knowledge and humanity.”

Tabrizian isn’t the only religious anti-vaxxer asserting that the COVID-19 vaccines can turn people gay. Israeli Rabbi Daniel Asor said last month that the vaccine “could make you gay.”

“Vaccines are taken from an embryonic substrate, and they did that here, too, so… it can cause opposite tendencies,” he continued.

Asor also said that a “global malicious government” that includes Bill Gates, the Freemasons, and the Illuminati. The virus was part of this government’s plan to “cull global population,” and the vaccine is as well because it’ll turn everyone gay.

In response, the Israeli LGBTQ organization Havruta said they are “currently gearing up to welcome our new impending members.”