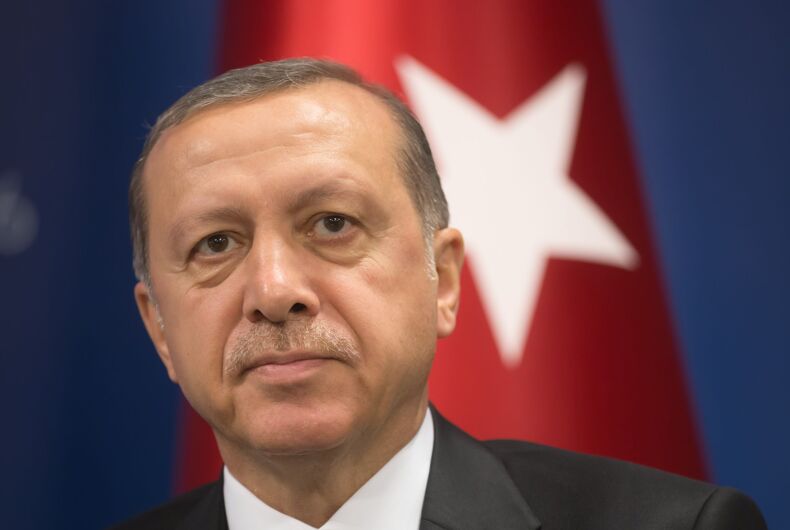 While governments around the world focus on finding a cure and preventing the spread of the COVID-19 coronavirus, Turkey’s government is warning about a different ridiculous danger.

Children worldwide have been drawing rainbows and hanging them in windows to comfort others during the coronavirus pandemic. The Turkish government has ordered schools to stop participating because it is an international “plot to turn children gay.”

Egitim-Sen, a teachers’ trade union, confirmed administrators were being instructed to end any participation in the project. The art museum Istanbul Modern has been promoting the effort to comfort neighbors and children during the pandemic lockdowns, but has also come under fire for displaying the drawings on their website.

Local activists say the government has been amping up attacks on the LGBTQ community and the pandemic has only increased the danger.

“Some of the commentators on mainstream and social media have stepped up their attacks on the LGBTI community during the coronavirus pandemic,” said Yildiz Tar, a member of the group Kaos GL, told Al-Monitor. “This is hardly new, but it is particularly perturbing that this hate speech is repeated by officials who portray the LGBTI as the culprits, rather than victims, of the pandemic. I am concerned that this hate speech, which has intensified over these critical days, will continue after the pandemic, becoming a permanent fixture of the political rhetoric.”

“We are a vulnerable group and have become even more so during the pandemic. The coronavirus outbreak left me without a job and a home, yet when I applied for financial support from the Ministry of Social and Family Affairs, I was rejected,” Ajda Ender told the outlet. “Not only do we not get any help from the government, but statements by members of the government and top bureaucrats put us at risk of physical and verbal attacks.”

Ender’s neighbors had repeatedly threatened her life. When she reported the abuse to police, she says officers laughed at her and told her it was the way she looks that caused the problem.

The head of the Turkish government’s Directorate of Religious Affairs (Diyanet) Ali Erbas recently used a Ramadan address to denounce homosexuality, which he said “brings illnesses and corrupts generations.” While he did not specifically mention the current global pandemic, Erbas said that homosexuality “causes” HIV, which is not true.

“Come and let’s fight together to protect people from such evil,” he said.

Erdoğan defended the cleric, saying, “What he said was totally right. An attack against the Diyanet chief is an attack on the state.”

In response, many LGBTI+s drew rainbows of their own: "There is no place for hatred in the rainbow!" https://t.co/ZnUF1dHenY

The very next day, during Friday prayers, President of Religious Affairs Ali Erbas targeted LGBTI+s, people living with HIV, and unmarried partners, claiming they "bring disease and corrupt the generation" (Not his first time spreading hatred against LGBTI+s, I must add)