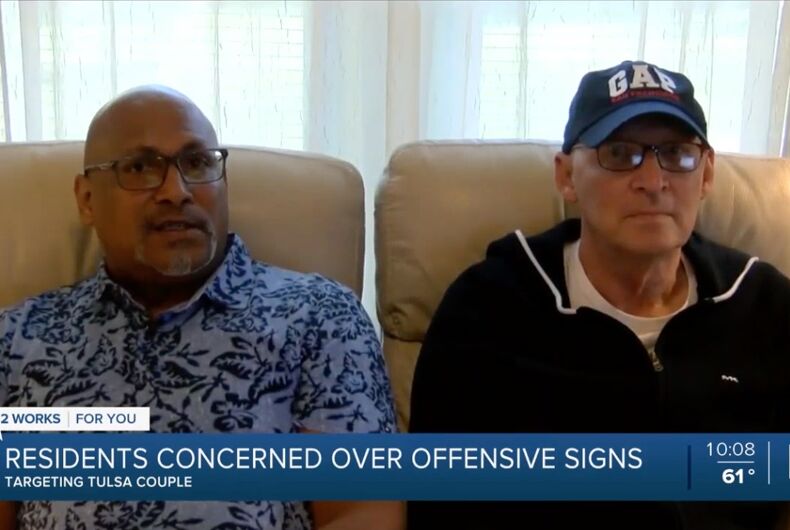 Terry Geasland and Christopher Jones are living a nightmare. Their neighbor across the street has started putting incredibly anti-LGBTQ signs and banners on his property.

One of three gay couples who live in the neighborhood, Jon Bailey’s signs have become a humiliation and insult for the area, but police say there is nothing they can do.

“I was brought up in a Christian home with Christian morals and values,” Bailey told local NBC affiliate KJRH. “I believe that homosexuality is wrong.”

“I’m not putting them down. I’m just standing up to them and saying this is wrong. I’m trying to show them there is a better way.”

“If you don’t agree with it, that’s fine, but don’t put up horrible defaming signs,” one of Bailey’s other neighbors, Cindy Roberts, said. “It’s just showing hate in our neighborhood, and we have kids here. I just hate it.”

“I have lived in this neighborhood for 17 years. I have never seen anything this awful. It disgusts me. I’m upset!”

Geasland and Jones moved into an old dilapidated century-old home two years ago and have been restoring the property. Now when they walk out their front door or sit on their deck, Bailey’s homemade signs confront them with hatred.

“It’s like wow in your face,” said Jones. “It’s very ugly. It’s demeaning and it’s a violation of humility towards my family.”

The men say they have no intent to move despite Bailey’s “love” because other neighbors continually check on them and have actively condemned the cold-hearted homeowner.

“They call us and keep checking to make sure we are okay,” Jones said. “We aren’t scared. We just thought that it’s 2020. We’re beyond this type of behavior.”

“We love living here and we love this house,” Geasland said. “Even the tree outside is 100 years old. It’s nice.”

A local ordinance forbids posting signs on private property if they’re in the right-of-way. Bailey’s signs are not, tying the police’s hands.

“There’s really nothing the Tulsa Police Department can do to this individual because he has the right to have freedom of speech,” Officer Jeanne Pierce told the station. “He has the right to post and hang whatever he wants on his property.”

“I know my rights,” Bailey said. “The gay and lesbian community are bullying people into being quiet and to being silent, and they are making people like me that are standing up against them feel like criminals.”

The station reported that the signs are so upsetting and despicable, they wouldn’t show them on television as part of the report. They blurred the writing on each one, preventing Bailey from spreading his hate even wider.