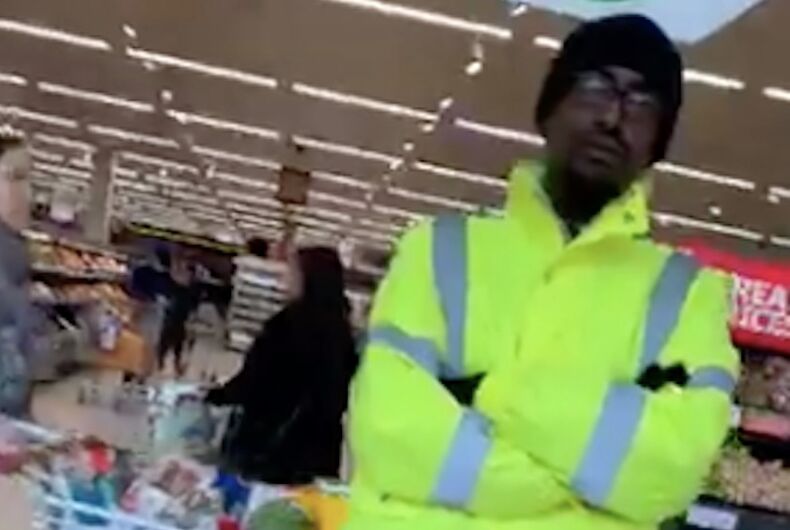 A gay couple claims a London location of the U.K. grocery chain Sainsbury’s kicked them out of a store for shopping together.

Jake Holliday was shopping with his boyfriend, Rhys, to purchase food for their respective mothers, Holliday says, when a store security guard allegedly told them to leave because the store has a coronavirus social distancing policy forbidding couples from shopping together.

Related: As coronavirus rages, gay couple gets spat on & called diseased during trip to supermarket

Holliday called the guard homophobic because he saw other opposite-sex couples shopping inside while other couples stood in a queue outside waiting to get in.

When a manager approached Holliday to discuss the situation, Holliday began broadcasting their interaction on Facebook Live.

“So I said to the gentleman (guard) politely, ‘We are actually a couple,'” Holliday explained. “He got very angry, very irate for no reason. I’ve not been rude at all to him.”

“It’s nothing at all to do with your sexuality,” the manager responded.

“Well, it feels that way,” Holliday said back. “Very much so.”

Holliday then told the manager that if she pulled up security footage from the front of the store, she’d see many other couples entering together. The manager then said that the store only allows people to shop individually and asks couples to leave, adding that some individuals may have “lied” about being single while waiting to enter the store and then tried to pair up once in the store.

“That’s fine if we were told at the entrance, but we wasn’t,” Holliday said. “So you’ve not done your job properly anyway because you let numerous couples into this shop.”

When the guard tells the men they didn’t come into the store together, Holliday protests, “Yes, we did! Check your CCTV. We were together in the queue.”

The manager said that she didn’t hire the security guard, but could pass on a comment about the incident to his company. Holliday said he wished to file an official complaint. However, the guard refused to show official ID and the manager told Holliday he had no right to record their interaction.

When the manager tried to tell Holliday to stop recording, he informed them that he was broadcasting the interaction live. The manager then reiterated that the men could shop separately, but Holliday sarcastically asked whether she had only been working as the manager for one day before walking off and announcing they he and his boyfriend wouldn’t buy anything from the store.

Here is Holliday’s video of his discussion with the Sainsbury’s guard and manager:

“The way we were treated was so humiliating and embarrassing – the whole store looked at us as if we were criminals,” Holliday told Metro UK. “Nearly four security guards, some with body cams, were circling us and nobody could seem to explain why male and female couples were allowed, but we weren’t.”

A Sainsbury’s spokesperson told the publication that it is “an inclusive retailer” and requesting people to shop individually for the time being.