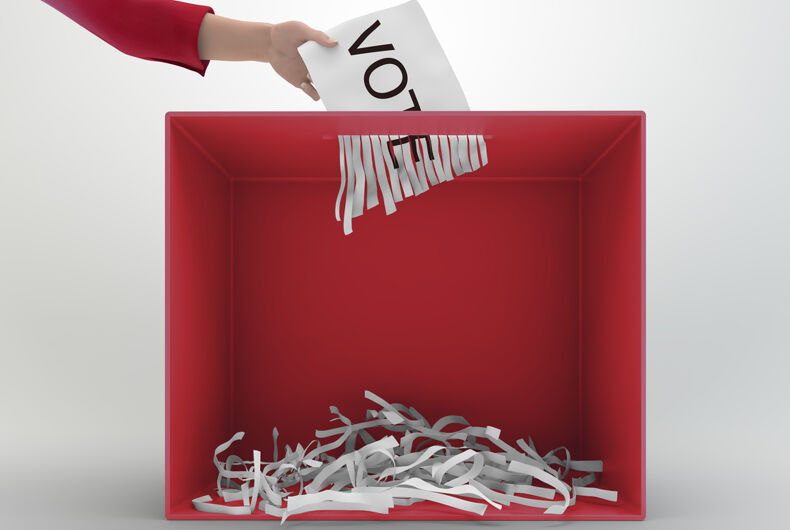 The traditional way of winning an election was convincing a majority of voters to cast their ballot for your party. But the Republican party has a new strategy: just keep the people who oppose you from voting.

Voter suppression is now as much a core tenet of the GOP as cutting taxes for the wealthy. In a video recently obtained by the Washington Post, one leading conservative activist told a conclave of fellow right-wingers last August, “Be not afraid of the accusations that you’re a voter suppressor or a racist.”

Knowing that they are not the choice of most Americans, Republicans will do anything – and everything – they can to counter the will of the majority. That means making it harder to vote by mail during the pandemic. It also means targeting minority and urban voters — including LGBTQ voters — with tactics designed to discourage turnout. (Voter ID laws already put an additional burden on trans voters.)

Faced with likely defeat in multiple races this year, the GOP is doubling down conservative-led efforts to make mail-in voting harder in Iowa, Pennsylvania, Minnesota, Mississippi, South Carolina and other states. In the same video obtained by the Washington Post, Charlie Kirk, head of Turning Point USA, a group that focuses on attracting young voters, advocated for keeping campuses closed to suppress younger voters, who tend to be more liberal. “Like, it’s a great thing,” Kirk said.

Other efforts are even more ham-fisted.

In Texas, Gov. Greg Abbott decreed that there could be only one drop box for ballots in each of the 254 counties in the state. That includes such LGBTQ havens as Travis County, which includes Austin, where more than five percent of the population identifies as LGBTQ. It also includes Harris County, which encompasses the Houston metropolitan area and its population of 4.7 million residents. By contrast, in Washington state (where has conducted elections entirely by mail for years), there are more than two dozen ballot box locations in Spokane County alone, with a population of 522,000.

After voters in Florida approved a measure in 2018 to allow ex-felons to vote, Republicans passed a bill requiring the newly eligible voters to pay any fees they owed before their rights were restored, essentially charging them a poll tax. When billionaire (and failed presidential candidate) Michael Bloomberg said he would pay the fees, the state’s Republican attorney general threatened him with a criminal investigation. (He paid the fees anyway.)

As if voter suppression wasn’t bad enough, Republicans were caught cheating by using the very measures they are trying to outlaw for everyone else. The California state GOP has set up official-looking drop boxes outside conspicuous locations such as churches in an effort to make it easier for likely Republican voters to cast their ballot.

Republicans decry such ballot harvesting, trying to prevent collection of ballots from groups that might otherwise have a hard time voting.  President Trump has condemned it in his usual fact-free, ranting terms as “RAMPANT WITH FRAUD.” At the August gathering of conservatives organized by the Council for National Policy, religious right leader Ralph Reed, head of the Faith & Freedom Coalition, said that his group would be going into churches to – you guessed it – harvest ballots.

Of course, voter fraud is virtually nonexistent. Indeed, the most recent high-profile examples of voter fraud involved Republican candidates: Rep. Steve Watkins and Mark Harris, a congressional candidate in North Carolina whose campaign collected incomplete ballots and then filled them in in Harris’ favor.

The pandemic and the president’s constant harping on imaginary fraud as of late has brought visibility to Republican voter suppression — but these efforts are hardly new. They date back decades, and they will continue long after Trump has left office.

The larger issue here is that the GOP won’t wrench itself away from its shrinking base, which is increasingly white, conservative Christian and frightened of change. The party can’t change without fear of alienating its biggest supporters, who have the power to throw apostates out when an even more right-wing candidate runs in the primary. Caught in this trap, there’s only one way to win.

That’s by making sure that the majority loses.

The American Dilemma: We’re suffering from incrementalism caused by the religious majority